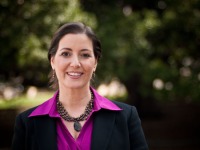 OAKLAND | Mayor Libby Schaaf knows her strengths. And one of them is the line-dancing phenomenon known as Cupid’s Shuffle.

Last summer, when Schaaf’s campaign for mayor found its groove, so to speak, one of the first indication of her more easy-breezy persona was revealed in a Facebook video featuring the mayor-to-be dancing at a community event in Oakland.

Her campaign would soon be an unstoppable force and cruise to a surprisingly easy victory last November. The first nine months of Schaaf’s administration have been trying but successful.