ALAMEDA COUNTY
A strong dose of distrust toward the Alameda County Sheriff’s Department and a lack of transparency is fueling opposition to a proposal by Alameda County Supervisor Nate Miley to transfer oversight of the Ashland REACH Youth Center from the county’s Health Service Agency to the Sheriff’s Office.

“This is an insane idea,” said George Galvis, executive director for the Oakland-based Communities United for Restorative Youth Justice, following a 45-minute presentation by the Sheriff’s Office this week at the San Lorenzo Library. “All any of us have to do is Google ‘Alameda County Sheriff’ and you’re going to see headlines of abuse.”

In a letter sent last December, Miley announced the Sheriff’s Office will become the lead operator for the youth center, effective in July. No reason was given and in subsequent months opposition to the directive has grown. Miley held a community meeting last week in Oakland, in addition, to a well-attended meeting in San Lorenzo on Wednesday. 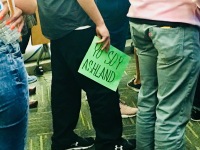 But Miley appeared to somewhat backtrack Wednesday from his statements in the December letter, saying the discussion over the youth center has only just begun and future meetings with the public and stakeholders are being scheduled.

Some members of the audience Wednesday, including Alameda County Board of Education Trustee Aisha Knowles and San Lorenzo Unified School District Trustee Janet Zamudio, asked Miley to begin a formal search for new operator through an open bid process and rescind his December letter.

“I’m not saying I won’t do that. I’m not saying I will do that,” Miley said about rescinding his letter. “Even though this is my district and I have a lot of influence, the Board could decide to do something contrary to what I decide, but quite frankly, probably, what I suggest is what they’re going to do.” After a few murmurs in the audience could be heard, Miley added, “Yeah, I’m just trying to be honest with you.”

The Ashland REACH Youth Center was completed in 2013 and serves teenagers and young adults, primarily in the unincorporated areas of Ashland and Cherryland. In some way, the center represents one of Miley’s most notable accomplishments as a county supervisor.

But while the center has provided an outlet for the area’s youth, in addition to health services, some who work there say that sheriff’s deputies have made their presence known in aggressive ways in the past, said Vassilisa Johri, assistant director of health and wellness at the Ashland Youth Center. Johri told Miley Wednesday that she fears sheriff’s deputies will target youths on a larger scale than before. She also worries that HIPAA compliance requirements will not be fully maintained if the sheriff’s office becomes lead operator. The law provides confidentiality between patients and caregivers.

Relationship-building is needed is the community in aspects other than law enforcement, said Alameda County Sheriff’s Sgt. Marty Neideffer. The program being proposed for the youth center is viewed as a national model for 21st Century policing in the United States, he said. “We’re not going to turn the place into a detention facility. Our interest has been the development of the youth. Opportunities for kids to go on and have a better life than their parents did and live what used to be called the ‘American Dream.'”

The future of the Ashland Youth Center is far from a resolution, said Miley. The Board of Supervisors will give final approval later this spring, but not before Miley meets the youth center’s staff, some of its vendors, area faith leaders, and other members of the community.