With heartfelt words, defiance, and a vow to stay true to her values, Hayward Councilmember Aisha Wahab was sworn-in Tuesday night, becoming the first Afghan American elected official in the United States.

“I ran because I believed the people of Hayward were hurting and struggling,” Wahab said after taking her seat on the council dais. “I believe we need to focus on issues that effect the most marginalized communities and I plan to do just that.” Later she added, “Now more than ever we need to come together. I will ensure there will be no more discussion about us, without us.”

As virtual unknown outside of local Alameda County political insiders, Wahab was the top vote-getter in the at-large election last November for two seats on the Hayward City Council. Running on a platform to bring more affordable housing and help to the city’s least fortunate, the addition of Wahab to the typically moderate Hayward City Council makes her, by far, its most progressive member. 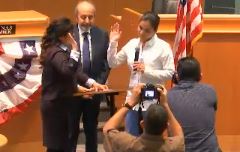 Wahab’s campaign, bolstered by strong fundraising and an adept ground game, was seen early as a long shot, which she acknowledged Tuesday night. “I heard the comments about my race, my age, my capabilities, my values, and much more. At times my voice shook as I continued to challenge the status quo. As a challenger we had every card stacked against us. I was told not to run, to consider a different seat, and to wait my turn. I learned that I was seen as a threat.

“This threat came with a message of equity, opportunity, and community. These are my values and I believe the people of Hayward share them. I followed my gut and I followed my heart. I ran for the veteran on a fixed income that struggled to find a job. The single mother working two jobs just to support her family and the college student sleeping in their car. That is what kept me going.”

During the campaign, Wahab often described city leaders as losing touch with common Hayward residents and failing to acknowledged their struggles as gentrification and displacement comes to Hayward. She delivered some passive barbs Tuesday night.

“I believe this is a clear indication that people are still fighting for equality, for an opportunity, and for a community with policy makers that hear them, see them, care for them, and, in the end, make the right decision for them. That means housing at all income levels, economic development and true community engagement to make Hayward a leader for working people,” said Wahab.

Wahab, who was born in New York, is not alone in making history. She will share the honor as the first Afghan American elected public official in the U.S. On the same night Wahab was elected, Safiya Wazir, a 27-year-old Afghan refugee, won a seat in the New Hampshire House of Representative.

With Wahab’s swearing-in, Hayward said goodbye to Councilmember Marvin Peixoto, who finished third in the November race. Peixoto served eight years on the Hayward City Council. In his farewell remarks he told the new council that building new affordable housing is Hayward’s most pressing need.

During Tuesday’s ceremony, Mayor Barbara Halliday was also sworn-in for another four-year term, along with Councilmember Sara Lamnin. In addition, Councilmember Francisco Zermeño was appointed mayor pro tempore by the new council, a ceremonial duty akin to vice mayor.