Audio of a secret recording made by Alameda’s former city manager of a meeting between her and two councilmembers released Wednesday highlights a lobbying effort on behalf of a labor-friendly candidate for the then-open fire chief position, but also

immense divisions between the city manager and the powerful firefighters union president. The 55-minute recording, highly anticipated by many in Alameda, however, sheds no new light on the scandal that in many ways is still enveloping the city’s politics.

Despite several investigations into former Alameda City Manager Jill Keimach’s allegations that Councilmembers Jim Oddie and Malia Vella improperly pressured her to select Dominic Weaver, a long-time Alameda firefighter whose candidacy for fire chief was backed by the firefighters union, the audio recording fails to reveal a smoking gun.

Former Alameda City Manager Jill Keimach secretly recording two councilmembers during a meeting in August 2017. Keimach did so, she said, because she believed the officials may do something improper during the conversation.

Nowhere in the recording that took place on Aug. 17, 2017, does Oddie and Vella clearly direct Keimach to select Weaver. Both, however, repeatedly suggest selecting a fire chief from within the fire department’s ranks, and that it would add a beneficial perspective for when the city deals with budget concerns and rising city employee pension and benefits costs. At least, one other Alameda firefighter was also considered a serious contender for the job. In October 2017, Keimach selected an outside candidate, Ed Rodriguez, a former Salinas fire chief, to lead the department.

“We have priorities about [Other Post-Employment Benefits] and some of this other stuff, I think that, you know, it would be helpful for us to have a partner in that position who’s been through it before, and who is going to be able to work with those members who, you know, are going to be very opinionated,” Vella said.

“So you’re saying you want me to hire Dominic?” Keimach quickly responds. “So I just don’t – you know, don’t want it to feel like one person has it above every – anyone else. And I, I’m hearing something different from – at least from you.”

“You want Dominic, regardless of who else is in the pool,” Keimach said. 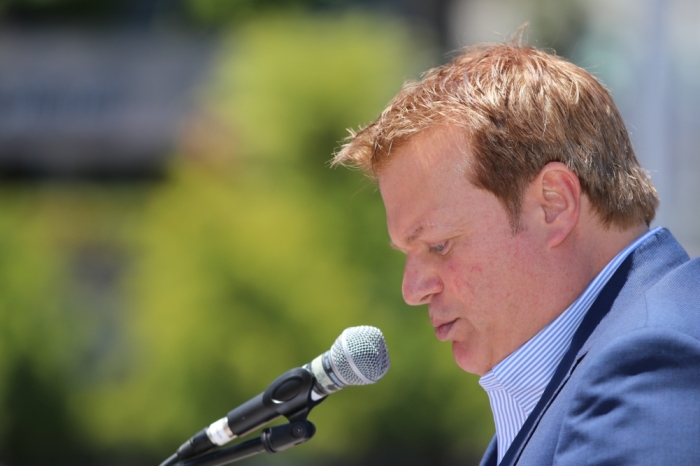 For all the controversy stemming from the fire chief-hiring scandal that began in the summer of 2017, the bottom line, definitive outcome followed a letter of recommendation sent by Oddie to Keimach in support of Weaver’s candidacy. The recommendation, however, was sent using city letterhead, which ultimately led an independent investigator to determine Oddie violated a city charter provision prohibiting elected officials from interfering in the city manager’s duties. In this case, her power to hire a new fire chief. Last summer, an Alameda County civil grand jury determined Oddie and Vella violated the city charter.

The recording makes reference to Oddie’s letter. In response, Keimach tells him, “That’s what I call the pressure.” When Oddie offers to pull his letter from a packet of similar recommendations for Weaver, Keimach tells him it is not necessary. “Well, you can leave it in there,” she told him.

Keimach, then adds, “I do appreciate you guys not pressuring me in sending the letter. Gotten it from everybody else, so.”

Meanwhile, the subtext of Keimach’s concerns during the meeting appear to revolve around an intense lobbying effort in support of Weaver by the Alameda Firefighters union and its then-president Jeff DelBono.

“I am a little disappointed in – we agreed initially that this would be an open and fair process, without any pressure. And it’s been the opposite from the Fire side and, including this meeting,” Keimach said. “That’s not what we agreed to, with Jeff and I.”

After Vella again reiterates that Keimach and DelBono attempt to work together again, Keimach added, “And I hope Dominic does well. I mean, that would be the easiest solution.”

“And if he does,” Oddie said, “and you pick him, I mean, you’ll have to be able to tell the folks that think you were pressured, that you weren’t.”

“Right,” Keimach responded. “And the pressure actually makes that – that’s the problem. The pressure makes it harder.”

“Yeah, I see that,” Oddie said, before adding, “You know, we’re not trying to pressure you today.”

Roughly two-thirds through the conversation, a large segment of the recording focuses on Vella and Oddie urging Keimach to repair a fractured relationship with DelBono. The conversation in many ways mirrors a counseling session for a damaged interpersonal relationship.

Oddie and Vella urged Kiemach to give DelBono daily updates on the fire chief hiring process as a way of placating him because he feels cut off from the process, the councilmembers told Keimach.

Oddie called DelBono a “diva” during the conversation. Keimach calls him “high maintenance.” And Vella equates his personality to that of a “chihuahua that’s like going to keep barking at you until you’re like, give it a little attention, and let it know it’s okay, and this is what’s going on.”

Its unclear what the audio recording’s inconclusive nature when it comes to proving wrongdoing on Oddie and Vella’s part, will mean going forward. Both councilmembers are expected to run for re-election next November. However, a pool of challengers, perhaps using the scandal as cudgel, has not yet developed. Former Alameda Mayor Trish Herrera Spencer, however, is likely to run for one of the two at-large council seats next year.