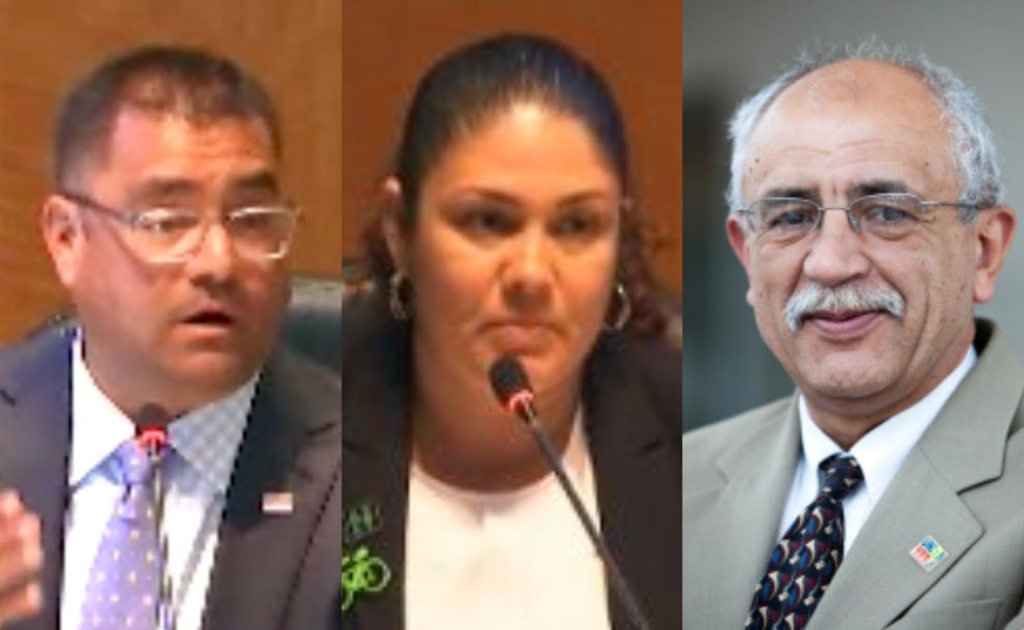 Hayward Councilmembers Mark Salinas, Elisa Marquez, and Francisco Zermeno will seek re-election this fall against a field of 10 challengers hoping to win one of four seats on the council.

Boosted by an emboldened group of progressives and activists, Hayward’s sprawling 13-candidate race for four seats on the City Council could be a once-in-generation reconfiguration of its political power structure.

The field of 13 candidates this November, includes three incumbents, and a field of newcomers baptized by Hayward’s dramatic push to the left stoked over the past two years by progressive Councilmember Aisha Wahab and an energized coalition of young Latinx residents, affordable housing advocates, and police accountability activists.

Hayward has seen other pivotal elections in which its winners heralded a new direction for the city, while given voice to a generation of new leaders.

This November’s campaign, however, may less about individuals and more about a distinctive progressive movement building beneath the surface in Hayward.

The seven-member Hayward City Council has long positioned its politics somewhere right of the East Bay’s progressives in neighboring cites.

But since 2018, progressives led by Wahab have gained additional protections for renters and momentarily accelerated increases in the minimum wage. Some long-time members of the council welcomed the new ordinances, but acknowledged their own inability to get them approved during their tenures.

During the same period, Hayward city leaders have felt the wrath of police accountability activists since the November 2018 killing of Agustin Gonsalez by Hayward Police. The incident stoked activism at City Hall not seen in years and revealed the council’s historical and unwavering support for law enforcement in plain view. The tumult led to interruption of several council meetings.

A group of four candidates are the likely front runners to win at least one seat on the council this fall. Hayward Planning Commissioner Angela Andrews has gained the endorsement of most of the council, in addition to Rep. Eric Swalwell. Because of her list of high-profile endorsements, along with a promising campaign fundraising haul of $27,000, as of June 30, most view Andrews as the establishment candidate in the race. Andrews’ election would make her the first Black Hayward councilmember since Olden Henson in 2012.

But the buzz within Alameda County Democratic circles is the group of progressives in the race, led by an unorthodox campaign of two young women calling themselves the “Challenger Slate.” Lacei Amodei and Elisha Crader have linked their efforts, including their campaign finances. Together, the political newcomers raised a surprising $30,000, a total that puts them just a tick behind Marquez’s $33,000 in cash reserves.

Amodei and Crader have been mainstays at council meetings for more than a year, advocating for renters and urging for police reforms in Hayward. Both are supportive of a letter to the council this summer detailing seven demands that include defunding the police department by 10 percent. In July, the Hayward City Council voted to cut nearly five percent from the police department’s budget.

University lecturer Nestor Castillo has since joined the Challenger Slate. To bolster his progressive bona fides, he gained the endorsement this summer from San Francisco District Attorney Chesa Boudin. Castillo has raised nearly $9,000, as of the June 30 mid-year reporting period.

The rest of the field includes Son Nguyen, the Republican candidate in last March’s primary for the 20th Assembly District. Nguyen was narrowly edged out of the top two primary with incumbent Assemblymember Bill Quirk. Two former council candidates, Tom Ferreira and the rambunctious Joe Ramos, are also in the race, along with Darrelle Demps, Chris Lozano, and Olympia Pereira.