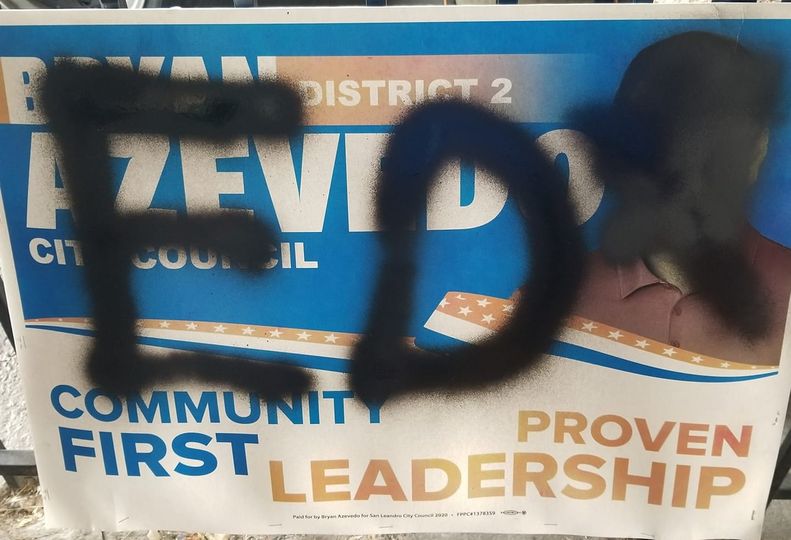 It won’t be the first time you will hear about political candidates griping about their yard signs being stolen or defaced this election season. But two candidates in San Leandro and Union City took to social media over the weekend to accuse their city council and mayoral rivals of underhanded political shenanigans.

Bryan Azevdeo, a candidate in San Leandro’s District 1 City Council race, said one of his campaign yard signs was defaced with the two-letter name of his opponent, incumbent San Leandro Councilmember Ed Hernandez.

Azevedo posted a photo of the yard sign featuring “Ed” spray-painted in black paint. A head shot of Azevedo on the sign is also blotted out. Azevedo called the act “uncalled for” and asserted home surveillance video of the vandalism might be available.

“I am not aware nor believe any of my supporters would have done this to his signs. Furthermore, I do not support defacing of any campaign signage,” Hernandez said.

In 2016, Hernandez beat Azevedo to win the then-open seat on the San Leandro City Council. A rematch this fall appears to be stoking a growing personal dislike between the candidates and their supporters.

Perhaps no other candidate in any Alameda County fall campaign has gotten an bigger head start in placing their campaign signs across the city than Azevedo. His yard signs have been around for months. So long, in fact, that early versions, created without a UV coating, have already been replaced by the campaign after fading in the sun.

In Union City, a three-candidate mayoral race is also drawing a similar sense of antipathy. Union City Mayor Carol Dutra-Vernaci’s bid for a third term is being challenged by Councilmember Jaime Patino, and New Haven school board member Sarabjit Cheema.

On Saturday, Patino called out the apparent removal of his yard sign from on a vacant home. Patino said signs for Dutra-Vernaci and Sandra Holder-Grayson, a candidate for the Union City Council, later replaced his on the same building.

Patino said he had permission from the owner to place his signage on the building. In his Facebook posting, which included several photos of the yard signs, Patino blasted Dutra-Vernaci.

“It is bad enough that you have done a dismal job as Mayor and won’t debate me to discuss how you have the City swirling around the drain down into BANKRUPTCY,” he wrote. “But now you two are playing these dirty childish games? Concentrate on fixing our financial mess and stop playing petty political games!”

Dutra-Vernaci responded on Monday, stating she had secured prior permission to to place her re-election signs at the property, while accusing Patino of not doing the same. “I have always followed the rules and always will,” Dutra-Vernaci wrote on Facebook.

Campaign skirmishes over yard signs is quite standard during any election season. But the prevalence of brickbats between campaigns, be it yard signs or aggressive virtual candidate forums, is coming before Labor Day, the traditional opening of the fall campaign season.

NOTE: Dutra-Vernaci’s comments were added to this story.