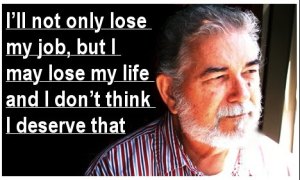 By STEVEN TAVARES
The Citizen FEATURE

John Kalafatich is a big man. He doesn’t use his size to intimidate, nor does he raise his voice very often. His face is ruggedly ringed with a white beard and topped by a thick mane of gray hair. He conveys a point without a word said, but the man known as Papa John cannot stay quiet any longer; not when his entire livelihood is dependent on the fate of San Leandro Hospital. It’s the source of the food in his pantry and the health of the heart beating in his chest. If Papa John can save the hospital, he figures, he can save lives, including his own.

The story of how San Leandro Hospital has reached the precipice of closure is a long and complicated tale of government secrecy, corporate deceit and community apathy. When you couple that triumvirate of evil, you have a recipe for disaster and Papa John is on a crusade to do what he thinks is the only right thing to do; speak up.

Aside from hurling a few choice barbs at a television set, Papa John had never been involved in a cause and his first foray into public speaking nearly fell flat. He meticulously wrote out notes to address the Eden Township Health District for a meeting in May, but mistakenly left them at home. He spoke extemporaneously only to see a camera crew from a local television station capturing his speech for the 10 o’clock news. Everybody told him he was great.

Since then, Papa John has spoken at nearly every hearing on behalf on saving the hospital. Once, Papa John, with his large frame ambled to the microphone during a meeting one afternoon in June and addressed the cocksure Alameda County Supervisor Scott Haggerty. He punctuated his allotted time by pointing at the supervisor and saying, “Remember my name. I’m Papa John.” His visage and moniker has become so popular that there is no longer any need to utter it. Just last month when addressing a panel brought together by state Sen. Ellen Corbett, Papa John merely rose to the podium, twisted his body towards the group of 300 behind him with outstretched arms like a prophet leading his flock and said, “What’s my name?” There were cheers among a cascade of nurses, yelling “Papa John!” But, that’s where the fun ends.

MY JOB, MY WIFE, MY LIFE
These are not good times for Papa John. He has been to the emergency room at San Leandro Hospital twice in the past month. He had heart bypass surgery five years and clearly remembers the job paramedics and staff at San Leandro Hospital treating his busted ticker in their the emergency room. For Papa John, saving the hospital is payback for saving his own life. Ironically, the same institution that saved him five years ago, is also the one exerting enormous pressure on his life today. His doctors think this 71-year-old man is crumbling solely from stress that emanates from a single focal point: the fate of San Leandro Hopsital.

Papa John derives his income from the hospital along with his health insurance and the doctors who care for him. He’s been a pharmacy technician there for over a decade. His long strolls through the corridors of the facility while he visits patients and an endearing propensity for calling nurses “kid” earned him the loving nickname of Papa John. He says the only positive about this situation is he loves his job, but if Sutter Health, the medical behemoth that runs both the hospital in San Leandro and Eden Medical Center in Castro Valley, has its way, Papa John and his adopted children in the nurses ward will likely be out of job.

If that weren’t enough, his wife of 51 years lies in an Hayward nursing home with severe osteoarthritis in both her knees and painful lymphedema that restricts the flow of fluid to her legs. The insurance company that handles Papa John’s health claim is refusing to pay. Two weeks ago, he received a bill for over $7,000 to pay for his wife’s care.

As Washington faces an uphill battle to reform the way health care is offered in this country, people like Papa John are forced to fight a battle for their lives. Two weeks ago, Papa John’s wife, Mary, finally received approval for surgery on her weary legs. The insurance company stepped in and felt a second opinion was needed from Mary’s primary doctor. Papa John believes the insurance company thinks they will be wasting their money on his wife’s legs. “I’m thinking, they’re looking at the bottom line again and not looking at the patient,” he said.

“This insurance company doesn’t seemed to want to pay for anything and you wonder why the government is pushing for some sort of insurance reform and health care for everybody. You wonder why, huh? You don’t wonder no more.”

He says the contract drawn up by the insurance company ensures payment for his wife until discharge. Mary has been in a nursing home since the middle of May. “They say now that they only pay until 30 days,” he says an anything after that costs him $131 a day. “No honest working man can afford that.” It’s funny how things turn out.

A NEW LIFE AT 57
Papa John never thought his life would be like this. He never had a taste for school as a child. His father died young and he saw the armed forces as a way to help his mother get through the tough times by sending home a monthly check. The military took him to the U.S. base in Morocco where he worked in an Air Force hospital. As fate would have it, an infirmed soldier called for his girlfriend to visit him, but she would eventually leave with Papa John and become the love of his life. “Big mistake,” Papa John said of the soldier’s decision. “When you’re in the hospital, don’t ever send for your girlfriend when Papa John is around.”

Today, though, he can’t retire and enjoy the last years of his life like his friends and family. He wasn’t always a pharmacy tech, either. He spent the majority of his working life as a warehouseman for a pharmaceutical company until severely injuring his back in 1994. He didn’t work for an entire year and says the company viewed him as “damaged goods” and got rid of him. He sued to get his job back and failed.

Papa John must continue to work because he has no other choice. He says his Social Security check would only cover his mortgage and nothing else. During that tumultuous year, he says, he drained his savings, his pension and the IRAs of both he and his wife to make it through the year. In hindsight, he should have taken people’s advice and filed for bankruptcy, but that wasn’t how Papa John was raised. You pay for what you get and get what you pay for. “This is why I would like to save the hospital and the ER, because the hospital and the ER saved me. So, I would like to pay them back.”

At a time when many Americans are gearing up for retirement, he began a new career at age 57. Papa John enrolled in Western Career College and earned a certificate on his way to becoming a pharmacy tech. Before long he passed up far younger graduates for a full-time position at San Leandro Hospital. It is that tenacious dynamic that now is a significant road block to his future employment if the hospital closes. “I’ll be a 71-year-old man out competing with 21-year-old recently graduated pharmacy technicians,” he said, “and having a wife in a nursing home will probably not go in my favor.”

Most signs point to a less than tidy solution for San Leandro Hospital. It is likely Sutter Health will soon announce the hospital’s definite closure as a full-service facility. Ninety days later, the hospital built in 1960 will shutter its doors. Whether those doors stay permanently close, though, may be just the beginning of a political nightmare for the city and a public-relations fiasco for Sutter Health. For Papa John and hundreds of nurses and doctors, though, anything less than the hospital’s current configuration will not suffice.

‘THIS IS YOUR CITY AND I TOLD HIM THAT’
The much-talked about hybrid plan pushed by Alameda County Supervisor Alice Lai-Bitker and San Leandro Mayor Tony Santos would marry acute care services and rehabilitation facilities under one roof. While the plan’s potpourri of services is viewed as better than no hospital at all, it will likely shake up the staff at San Leandro Hospital who are primarily represented by the California Nurses Association. A hybrid plan, in its current iteration, would put the hospital under the county’s control, which is predominately staffed with nurses from the Service Employees International Union.

“The hybrid model is not a good idea,” said Papa John. “It might be good for a car, but not for a hospital. You’re either a hospital or you’re not. If the county takes over, they’re going to bring their pharmacy people here.”

Papa John faith in saving the hospital has not been hastened by what he sees as ineffectual local leadership and politicians shifting the blame to one another. He was appalled by the inattentiveness of Alameda County Board of Supervisors Scott Haggerty, Nate Miley and Gail Steele during another meeting in June when a few ducked out and one tuned out.

“Haggerty and Miley kept leaving the podium,” recalls Papa John. “They must have been going to the back room to get a toot or something, I don’t know. The only ones who stayed out there the whole time was Alice [Lai-Bitker] and Gail. The reason Gail stayed was because she was asleep.”

Last month, outside of a heavily-attended town hall meeting with Rep. Pete Stark, Papa John confronted Mayor Santos and questioned his desire to save the city’s only hospital. “His coming around has been minimal and his participation has been less. He said this is really not a city issue,” Papa John recounted. “What the hell do you mean? We’re not talking about Hayward. We’re not talking about St. Rose. We’re talking about San-LEE-andro Hospital. This is your city and I told him that.” Papa John said the mayor protested that perception.

SAY A PRAYER
Don’t blame Papa John for telling it like it is. He says don’t ask for his opinion, if you’re not going to appreciate what he has to say, but his life outside of work and attending hospital meetings, has become achingly solitary since his wife’s convalescence. He’s become handy cooking meals with the microwave and visits her when he’s not working.

“I’m very lonely,” he admits. “I’m at home sometimes and I’m thinking, I don’t know how much more I can take. I talk to the man upstairs and I say, ‘What am I going to do?’ I’m running out of ideas. I get these emails saying, ‘If he got you to it, he’ll get you through it.’ Well, where the hell is he right now?”

In the meantime, Papa John is plotting his next speech, whenever that occurs. He says he’s been working on a newly crafted rejoinder that goes something like this: “If you people decide to go against what everybody wants, I’ll just ask you to do one favor, every time you hear an ambulance siren in San Leandro, say a prayer for the person in the back, will you? Because he might not be able to make it to the next ER.”