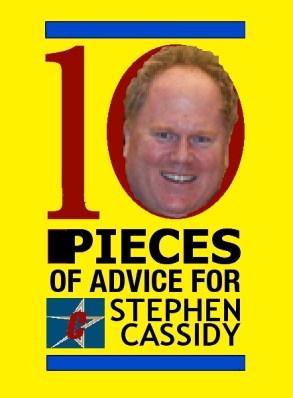 10. Act like the liberal that you are. Mayor-elect Stephen Cassidy does not natural possess the center-right political ideology upon which he cajoled resident to vote for him. Cassidy is actually center-left on most issues and less liberal than his predecessor, Tony Santos. The moderate aspects of the Democratic party so enamored him that in 2004, he traveled to Iowa to campaign for then-presidential candidate Bill Richardson. If Cassidy wants to quell initial reservations about his liberal pedigree, it would be best that he lay low on pension reform or risk further stoking a rebellion at City Hall. If he has political ambitions outside of San Leandro (which many believe he does) it would be best to limit the kind of bad press he received from union leaders. You don’t go far in this area without union support.

9. Be a nice boy. Everybody is waiting for those first exasperating words of condescension coming from Cassidy’s mouth. Condescension sprinkled in with a bit of irony or self-deprecation is how most people get by with an occasional zinger, but it has always been difficult for him to seem at ease in public. It wouldn’t hurt to wear a funny tie to break the ice. Show you are human. If all fails, bring a clutch of week-old puppies to council meetings. People love puppies and, by extension, they will love you.

8. Don’t dictate in public. Before Cassidy discontinued public comments at council meetings about six months before the election, there was no greater example of his prickly nature than his tendency to publicly instruct council members and school board members on how they should do their jobs. The finger-waging did more to burnish Cassidy’s well-deserved reputation as a legislative bully than anything else. A few councilmembers told The Citizen earlier this year that found his personality oft-putting. They didn’t have to say it because they all had a look of disbelief bordering on contempt whenever he told them what to do.

7. Get the Marina done quickly. The best and easiest way to quickly put a feather in your mayoral cap would be to wrap up redevelopment of the Marina. Give the city’s “shining civic jewel” a good cleansing and take credit for it. If you give more credence to a small minority of residents in the Mulford Gardens neighborhood who want to stifle development of the moribund Marina, you will lose the opportunity for credit. A vast majority of San Leandrans want the Marina populated with shopping and dining opportunities. If you stand by your campaign statements putting the redevlopment up for a city-wide vote, you will drop the ball. This is a campaign flip-flop easily forgiven by voters.

6. Stay away from polarizing figures. Cassidy’s liberal support mirrors itself in the often times rudderless left in national politics. Let’s face it, it’s hard to keep liberals in lock step and Cassidy has the same problem. Arguably, he won the election because he and his support from the city’s eastside outworked Santos, but the cast of characters largely from the SLCAN group of supporters might sway Cassidy way to the left, bordering on the bizarre brand of politics sometimes practiced in Berkeley. People’s Park South is not what San Leandrans want to be, despite the attitudes of this group. Don’t let them embarass you with their tendency to grab attention away from you in the name of some loony, Utopian and hair-brained liberal dream. Remember, San Leandro loves Christmas!

5. Speak up for the minority and poor. We didn’t hear nary a word from Cassidy about the plight of San Leandro’s burgeoning ethnic minorities, nor concern for those struggling and there are many in a drastic economic bind these days. In contrast, Cassidy allowed city workers to take it on the chin. Cassidy has to begin to limit the perception his candidacy will be about San Leandro’s elites and not about the city as a whole. Put it this way, most San Leandrans wish they forego the mayor’s salary or any check if it translated to economic security.

4. Say something nice about San Leandro. Here’s a few ideas: “Only in San Leandro can you win an election with 35 percent of the vote. God, I love this place!” “San Leandro is a great place to live…and die. C’mon, seniors die already!” “San Leandro: It’s not Hayward!”

3. Find a direction for business. This could be your legacy if you choose wisely and position San Leandro competitively in the next wave of business innovation. San Leandro sits nicely between a new wave of green tech possibilities to the south and a growing creative class to the north. Put most of San Leandro’s eggs in those baskets and roll the dice. The alternative is a continued slide into irrelevance. San Leandro’s industrial past is just that and hasn’t changed for 20 years. Get on the green tech boat and watch your downtown boom. The hipsters and great chefs will ultimately follow.