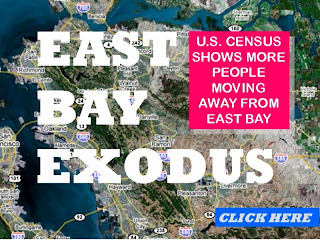 CENSUS: BAY AREA IS GROWING FAR LESS THAN THE REST OF THE STATE
By Steven Tavares

The East Bay along with the entire San Francisco Bay Area is seeing an unprecedented change in its ethnic demographic, according to U.S. Census figures released Tuesday.

Asians and Latinos found significant gains in several East Bay cities, yet the overall flow of the population is skewing radically away from the region in droves for the Central Valley.

While the state grew by 10 percent in the last decade, the Bay Area lagged far behind. Alameda County’s 4.6 percent population increase is alarmingly low next to its neighbors in Contra Costa and San Joaquin Counties. While Contra Costa grew by 10.6 percent, hyper growth in San Joaquin is a whopping 21.6 percent. Riverside County in Southern California followed a similar shift in demographics as the East Bay and led all counties in expansion by adding over 350,000 residents, representing a 41.7 percent increase.

The large discrepancy between counties ensures East Bay congressional districts representing a portion of San Joaquin voters will now receive an even larger portion of the more conservative constituency. Reps. Jerry McNerney and Pete Stark, already representing a portion of Tri-Valley, will likely have their districts further transformed. Reps. Barbara Lee and John Garamendi will likely face similar situations in the north.

San Leandro, which grew a healthy, by East Bay standards–seven percent–still fell well behind the state average. It added over 4,500, increasing its population to 84,950. The East Bay city followed similar changes in its racial composition to nearby San Lorenzo and Hayward. With the latest census, San Leandro now possess three nearly equal racial minorities. Already one of the most diverse cities in the Bay Area, San Leandro demographic is now topped by Asians (29.3%), Latinos (27.4%), whites (27.1%) and blacks (11.8%).