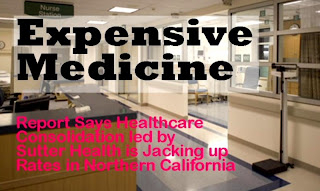 NORCAL PATIENTS PAY FAR MORE THAN THOSE IN SOCAL ATTRIBUTED TO SUTTER’S DOMINANCE
San Leandro residents are well aware of the threat to their health and pocket book as hospitals like Sutter Health move to consolidate their presence in the Bay Area and Northern California, in general. In many ways Sutter’s attempt to close San Leandro Hospital, local critics have long said, is part of a greater goal by the Sacramento-based health care provider to control pricing and remove competition from the region.

The Los Angeles Times reports there is more than anecdotal evidence that shows patients in Sutter-dominated Northern California pay far more for health care than those in the southern half of the state.

According to the report, those in the north pay $5,169 per day for health care as opposed to just $3,578 in the south. Why? Supply and demand. One in five hospitals in the north is operated by Sutter, allowing for far more control over its ability to charge higher rates.

Critics in the East Bay say the wish by Sutter to consolidate its services in San Leandro and Castro Valley is part of their plan to wring more money out of the new Castro Valley Medical Center currently under construction. Three years ago, Sutter was able to work a deal with the Eden Township Healthcare District, in essence, trading the reconstruction of Eden in Castro Valley for the demise of nearby San Leandro Hospital. Sutter operates both facilities.
The legality of the 2008 agreement is currently being contested in the courts by the healthcare district, while San Leandro Hospital continues to operate. Despite overtures by the CEO of nearby St. Rose Hospital in Hayward to operate San Leandro Hospital, it is believed Sutter will wait it out until the courts decide the facilities fate. But, if this report shows anything, it gives a glimpse of Sutter’s overreaching position that having less competition is more favorable to its bottom line.

Reynoso doesn’t have Hayward USD to kick around anymore; school board begins search for replacement