Home › ACAP › County Program For The Poor Sends Itself Packing

County Program For The Poor Sends Itself Packing 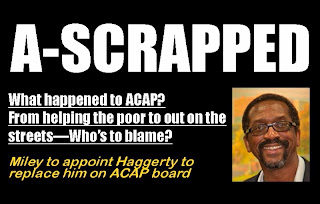 Just a few months ago the Associated Community Action Program laid comfortably in anonymity. Mostly known only by the poor who needed its assistance to live one day at a time. In just a flash—in the eyes of the 13 Alameda County elected officials who oversee the program, at least—everything was gone. Plundered by a nefarious couple or all-around incompetency, it is now slated for dissolution within the next three months. The board of directors voted last Wednesday to scrap ACAP, further jeopardizing its dwindling workforce and questioning how it will reconcile a reported $400,000 debt to vendors and Alameda County taxpayers.
None of the 13 members of the ACAP comprising every city in the county, but Oakland and Berkeley, seem to have any answers to the perceived rapid decline of the program designed 36 years ago to help combat poverty in the county. One county staffer, who asked not to be named, said the future of ACAP has long been whispered along with many putting the program’s importance low on its list of priorities. Many point to the board’s lack of participation within the last year as evidence of its unimportance. Numerous meetings were cancelled due to a lack of a quorum of seven members. Even as the fate of ACAP become widely known, a few members still possessed less than perfect attendance in the past month.

ACAP’s precipitous fall has been swift and without pause. Whispers of its dissolution were already broached Feb. 23 by representatives from Albany, Emeryville and Union City claiming their respective cities reaped little or no benefit from ACAP and protested paying equal shares with bigger locales like Hayward and San Leandro to bail it out. Less than two weeks later, the program is gone without anybody to blame but its disgraced former executive director Nanette Dillard and her husband Paul Daniels, who was employed as a grant writer. The couple has been alleged to have been caught on video ransacking their offices on the night the ACAP board dismissed them.

At the forefront on ACAP’s demise and potentially unscrupulous involvement is Alameda County Supervisor Nate Miley. The current president of the board, according to a county staff report, will appoint Supervisor Scott Haggerty to replace himself on the ACAP board as it passes through its final days. Miley will be demoted to alternate. His connection to ACAP runs deeper than the 10 years he has sat on the board representing the county. Miley’s daughter also works for ACAP. Her employment and genuine interest in the issue allowed Miley a far greater insight into the program and its fall from grace, according to some officials. Miley, who represents areas mostly comprised of Castro Valley, has been quite forthright in answering critics about his involvement in ACAP, although, a bit too much, at times.

During the Feb. 23 ACAP meeting, Miley said he had known of the program’s money troubles for awhile and offering he had a fondness for Dillard and attempting to help her on numerous occasions to fix its structural problems. During a supervisor’s meeting a week earlier, Miley said a consultant had described ACAP’s situations in detail to him. The consultant told Miley if something is not done soon “it could go off the cliff.”

If a consultant told Miley of ACAP imminent demise, he failed to tell the other 12 representatives of the board, according the their prevailing opinion. Many members said they were caught flat-footed by its recent woes. Newly-appointed Chair and San Leandro Councilwoman Diana Souza has said news of ACAP’s inability to pay its employees in mid-February was a surprise. Days later she asked the county supervisors for a $321,000 loan, only to be rebuffed. A few days later, the supervisors offered to loan ACAP $75,000 to pay its employees for February.

Miley described himself as going out on a limb for ACAP by twisting arms on the board of supervisors to support the loan. At one point, threatening the ACAP board to cooperate with the county to pay back taxpayers. How the county will recoup its loans from ACAP is unknown at this time. In the meantime, numerous local non-profits—already struggling—will have to make due without services from ACAP. The burden on those barely surviving will also extend to dozens of employees who now ironically need to fend for themselves with thousans of others on the unemployment line.

Like Loading...
‹ Episode 23 of the East Bay Citizen Podcast is Available
Fear Of Retribution, Lack of Oversight Cited For Collapse of ACAP ›