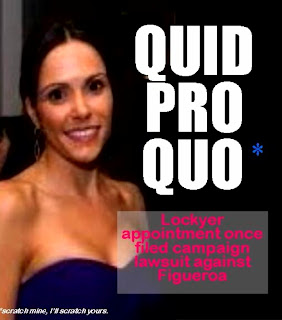 Consumer affairs attorney Suizi Lin’s appointment was approved within the consent portion of the agenda. The five-member board is charged with overseeing best business practices and consumer protection in the county.

The connection between Lin and the Lockyers goes back to State Treasurer Bill Lockyer’s days as attorney general. Lin worked as an extern in his Southern California office. She also works for the same Hayward law firm that Lockyer is employed as “of counsel.”

Last March, as the race for District 2 supervisor heated up, Lin filed a complaint with the county registrars’ office alleging Figueroa’s job description of “job developer/educator” was false. The designation was later changed.

While the suit was initially reported as merely a concerned local resident acting on their own accord, Lin told The Citizen, she was approached by the Lockyer campaign to file the lawsuit. She agreed all along with the premise Figueroa misrepresented her occupation for her ballot designation, Lin said. Lockyer went on to win the June primary, but failed to gain a majority of votes. She easily beat Figueroa in the general election with over 66 percent of the vote.

Like Loading...
‹ Fear Of Retribution, Lack of Oversight Cited For Collapse of ACAP
Bill Lockyer Hangs Up On Conservative Talk Show Host ›