Home › budget › With Projection Of Smaller Deficit, Cassidy’s Cause Get Tougher

With Projection Of Smaller Deficit, Cassidy’s Cause Get Tougher

WILL UNIONS MAKE MORE CONCESSIONS WITH A $1.26 MILLION BUDGET SHORTFALL?
By Steven Tavares 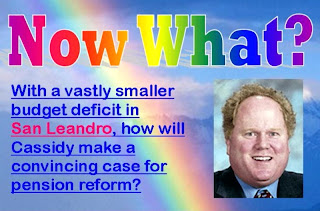 San Leandro Mayor Stephen Cassidy will undoubtedly bring up his plan for pension reform for city employees during Monday’s State of the City address, but times have changed in just the few months since he took office. The main argument for convincing a skeptical city council of backing his proposal is rapidly disappearing for the good of the city, but not necessarily pension reform. His main obstacle? Things just aren’t as bad as they once were.
Back when Cassidy began his campaign for mayor, he preceded it with numerous appearances before the council ramming home the idea the city was near bankruptcy in large part of a growing obligation to city employee pensions and benefits. Back then the city’s finance director was forecasting a deficit over $7 million. Whether Cassidy won the election because of fears over the city’s budget is open for debate, although it was the main distinction in his platform over his opponents.

San Leandro’s new finance director Tracy Vesely had good news for the city earlier this month when she told the finance committee the deficit could be just $1.26 million for the coming fiscal year. The forecast takes into account no wage increases, a $300,000 increase in revenue, a modest 4.5 percent rise in CalPERS and a big if—no state takeaways. With the Legislature’s recent inability to tame the state’s budget, the specter of Sacramento dipping its hands into local coffers is always a possibility.

Cassidy’s main task, assuming Vesely’s budget forecast is in the neighborhood of $1 million or so, is how to convince union members and opponents it’s in their best interests to further give up benefits for a budget far less tumulteous than once thought.

By the end of the current union contracts, San Leandro city employees will have gone nearly five years between pay increases while paying more for health benefits. As Councilwoman Diana Souza again pointed out, the history of city employees taking a hit financial hit for the economic health of the city goes back years. It is well known union employees took increases in their pensions over pay raises to save the city money when the dot.com bubble burst over a decade ago. The lack of institutional memory of that concession by some at City Hall is a fact that rankles the rank-and-file when Cassidy utters rhetoric calling for shared sacrifice.

National attention and hostility over pensions and collective bargaining in Wisconsin also does not help Cassidy’s argument for reform. Although, like many communities, union strength is waning in San Leandro, but the levers of power still run through its members. With a projected deficit of few millions in San Leandro, as opposed to relatively gigantic shortfalls in neighboring Fremont and Oakland, using the collective economic uncertainty to stick it to unions seems like contrived opportunism and almost silly.