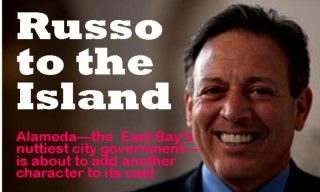 When it comes to bizarre antics and dastardly political soap operas no city in the East Bay tops Alameda. From deposing its city attorney, city manager and hatchet jobs on councilmembers to gotcha videos of its fire chief siphoning city gasoline for his own personal use; no municipality has endured more than Alameda. Now, reports say Oakland’s own controversial city attorney John Russo is Alameda’s choice for city manager. Things on the island appear to be on verge of getting even more interesting.

The Alameda blog, The Island, reports various sources told the web site the city council has settled on Russo. The council is scheduled to discuss the matter Tuesday evening in closed session. Other reports, though, say Russo has not yet accepted the offer. The position opened Dec. 28 when the council put interim city manager Ann Marie Gallant on administrative leave. Earlier this month, Gallant filed a claim against for the city for financial damages.

If Russo becomes Alameda’s new city manager, he will leave behind his own circus of tension and upheaval in neighboring Oakland. While lauded for his tough stands against crime, notably the city’s proactive gang injunction program, it is his stance on large-scale medical marijuana cultivation sites in Oakland brought calls of uncooperativeness from the new mayor and several councilmembers. Russo’s public comments saying he would not advise councilmembers if they were to approve the so-called pot farms upset some in the community. He contends such an action puts each member at personal legal jeopardy. Medical marijuana, while legal in the state from the introduction of Proposition 215, is still illegal under federal law.

Last week, Russo added to discord among some in Oakland when a suspected gang member testifying in court was hauled away by police who contend he vioated his parole by playing loud music from his car. Red-hued paraphenalia was susequently found in his automobile. Russo then took to Twitter Mar. 22 to mock the suspect. “Gang injunction “star” defndnt found last nite in car w drugs & gang symbols. Last wk he testified under oath that he knew nothing re. gangs,” Russo wrote in the tweet.

Some critics of the possible hiring have pointed to a possible conflict of interest among a few Alameda officials charged with choosing the next city manager. Russo has pledged public and financial support in the past year to three of the current councilmembers, including Mayor Marie Gilmore, Lena Tam and newcomer Rob Bonta.

In recent years, Alameda’s city government has been roiled in political backstabbing and treachery seen in no other East Bay locale. Wrangling over development of the Alameda Naval Air Base has been the epicenter of numerous controversies that have swallowed both the city attorney and city manager and featured an investigation of Tam for leaking information to reporters and the lead developer, SunCal.

Alameda’s Fire Chief was then caught on video last year filling up his sports car with city gas, which some believe was a set up by union members in the department. The inclusion of Russo to the mix is liable to make the battlefield in Alameda even more combustible where most of the city government is stumbling around Park Street with visible gashes and bruises on their political resumes. But, what else could Alameda endure? A Russo-led injunction of lemonade stands? I could happen, Little Timmy.