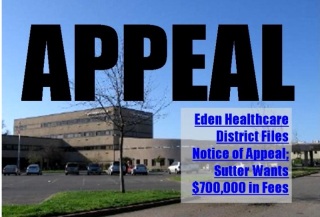 The Eden Township Healthcare District could be on the hook for an additional $700,000 in legal fees if it does not win its appeal of a Superior Court decision last November.

The District has already spent over $2 million in fees to its legal council since Sutter Health filed suit against it in October 2009 over the title of San Leandro Hospital. Lawyers for Sutter filed a memorandum of costs Mar. 28 enumerating $700,117 in bills including attorney, filing and deposition fees. Over $679,000 of the total is attorney fees alone. A hearing to discuss awarding Sutter’s potential spoils is scheduled for Aug. 19, but in the meantime, the District hopes the legal process fails to get that far.

Lawyers for the District filed a notice to appeal the November decision on Monday. The move had been expected for months after the District Board of Directors approving the action in December.

The nearly three-year-old battle between the District and Sutter over the fate of San Leandro Hospital has been long and contentious. After the blocking Sutter’s right to purchase San Leandro Hospital and lease it to the Alameda County Medical Center in the summer of 2009, Sutter took the dispute to court hoping to gain title of the facility.

In early 2010, the District fought back, approving a strategy to file a cross complaint against the Sacramento-based health care provider on the grounds members of the previous District board possessed a conflict of interest in their employment by Eden Medical Center, which is operated by Sutter. Along with former District board member Dr. Francisco Rico and current director Dr. Rajendra Ratnesar, lawyers for the District alleged the CEO of Eden George Bishalaney also had a conflict as the operating officers for both the District and Eden when the controversial 2008 Memorandum of Understanding was negotiated and signed.

The deal, in effect, guaranteed Eden to be rebuilt and financed by Sutter, but also put San Leandro Hospital’s fate in a precarious position. Within in a year of the agreement, Sutter groused over the hospital’s ability to be self-sufficient, saying it consistently incurred monthly losses of up to $600,000. Critics, though, said Sutter’s unique position as operator of both Eden and San Leandro Hospital allowed it to pass losses to San Leandro’s book in an effort to limit competition for its new $300 million facility in Castro Valley.

Last November, a Superior Court judge ruled against the District’s cross complaint finding it did not prove Rico, Ratnesar and Bischalany possessed a conflict in negotiating the MOU leading to the notice to file an appeal this week.