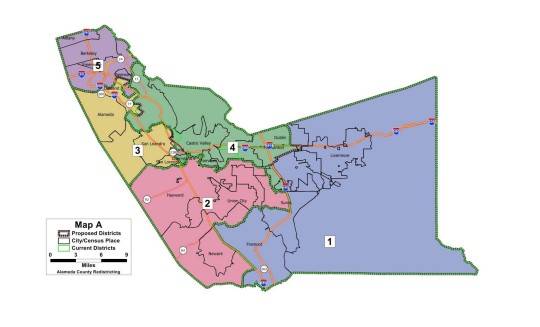 The state is not the only government body doing more than moving the furniture around its legislative boundaries, local government is also dividing itself into district’s at the county-level.

Two redistricting maps released today by an Alameda County Board of Supervisors ad-hoc committee and the Community Development Agency offer two proposals meant to even out the redistribution of population towards the county’s eastside.

The proposed reconfiguration maintaining most of the current boundaries is already attracting criticism from officials in Pleasanton where that city would be split between Supervisor Scott Haggerty’s District 1 and Nate Miley’s District 4. The previous map used the natural boundary of Interstate 580 as the boundary and placing Dublin in Miley’s district. The newest proposal would drop the boundary south below the freeway and bisecting Pleasanton. Aside from a movement of the boundaries in the north around Albany, there is very little difference in the map created a decade ago.

Despite the minimum changes for the 2011 map, an influx of residents towards the valley has become one of the top issues concerning the changing population of the East Bay and entire region.

No city in Alameda County came close to the increase in population in Dublin, where it grew by 53.6 percent to 46,036 people. Its Tri-Valley neighbors, Livermore and Pleasanton increased by 10.4 percent over the last 10 years, according to the U.S. Census. Those totals, though,represented average increases within the state, where the population grew by 10 percent. Alameda County, by contrast, grew by a measly 4.6 percent.

Like redistricting maps for the state Legislature and House of Representatives, each region must contain relatively equal numbers of people. In those regards, the largest shift in the county will occur in Supervisor Wilma Chan’s District 3, where it is 22,000 people below the target variance of 302,000 people and Haggerty’s District 1, which represents the largest positive variance topping over 29,000 new residents.

The second map, also created by the ad-hoc committee composed of Supervisors Haggerty, Miley and Keith Carson, is far more ambitious and vastly less complicated than the current setup, but unlikely to be approved.

Map B would stack Districts 2,3,4,5 along the San Francisco Bay and create one super district encompassing more than half the topography of the county. Carson’s District 5 in the north would slide south, while Miley’s District 4 would slide to the west to also represent Alameda. San Leandro would remain in Chan’s District 3 and Nadia Lockyer’s District 2 would gain more of Fremont from District 1.

The likelihood of Map B gaining any foothold does not appear likely. In the PowerPoint presentation for the series of six redistricting meetings in the next 10 days starting today in Dublin, there is no mention of the more radical proposal. The county’s new district boundaries could be approved by the Board of Supervisors as early as the July 12 meeting and finalized two weeks later.