ELECTION ’12 | ASSEMBLY 20
HAYWARD | Oct. 23, 2011 | Political campaigns, usually cash-starved in the early goings, typically provide fundraising guests with a light menu of appetizers, a simple cold cuts platter from Costco and maybe a watered down cocktail. Bill Quirk’s kickoff fundraiser for state assembly last week featured none of that. Instead, the two-term Hayward councilman served guests–over 100 of them–meaty portions of specific policy suggestions, he believes, will create new jobs in the state. 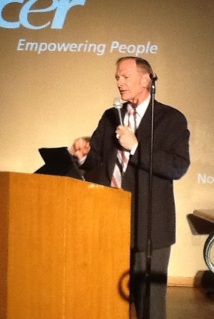 Quirk’s speech last Thursday was notable for its lack of campaign platitudes and high-falutin generalities, but heavy on sometimes wonky specifics.

Quirk’s platform for beginning to put Californians back to work includes increasing funding for education, simplifying the regulatory process for small businesses and a continued focus on green energy technology.

Quirk also pledged to support various temporary tax initiatives likely on the 2012 ballot. “None of my opponents have made that pledge,” said Quirk.

“My primary goal in Sacramento will be to help Californians get work,” said Quirk. One of the ways the state can stimulate job growth, Quirk said, is to streamline the permit process for new businesses, while still protecting consumers and the environment. Quirk highlighted a proposal floating about the State Senate containing a one-stop permit process. “This would be particularly important for small businesses that do not have the expertise to deal with the air board and the water board and many different agencies,” he said.

Quirk is hoping his background as a scientist will entice voters interested in the environmental movement to listen closer. Although state law will require 30 percent of the state’s energy is derived from renewable energy by 2020, “passing a law does not guarantee it will happen or that the energy will be affordable and reliable,” he said. The state routinely pays neighboring Nevada to take excess wind energy generated at night, he added. “We need not only to have a goal of more renewable energy, we need to have an energy system that works.”

“In order to integrate much more renewables into the energy production mix, we will need cheaper ways to store renewable energy when it is produced. We will need to provide market incentives for short and long term storage such as batteries and pumped hydro power,” said Quirk. “Natural gas plants may be needed to supply energy during the highest demand days.”

Working the clean energy constituency in the 20th District, though, is a slippery slope for Quirk after he backed approval for the controversial Russell City Energy Center on the Hayward Shoreline. Environmentalists and nearby Chabot College have vociferously opposed the natural gas-fired plant currently under construction. Quirk received $1,000 this year from Calpine, the owner of the new power plant, according to campaign fundraising reports.

Quirk’s support among local political heavyweights was also on display. In attendance was Fremont Assemblyman Bob Wieckowski and State Majority Leader Ellen Corbett, who said she is offering her support for Quirk’s candidacy, but not endorsing him at this time.

“Bill Quirk is an answer to our prayers,” said Union City Councilman Richard Valle, who said Quirk’s political style will help loossen the “molasses’ currently in the Legislature. Fremont Councilman Domonic Dutra and a contigent of Quirk’s colleagues on the council, including Francisco Zermeno, Marvin Peixoto and Mayor Michael Sweeney also heralded their support.

Optometrist Dr. Jennifer Ong is also a candidate for the redrawn 20th Assembly District covering Hayward to parts of Fremont. Union City Mayor Mark Green has filed papers for the same seat, although as of the end of August, no fundraising was reported to the state secretary of state’s office.

Due to covid-19, Hayward set to delay increase to its minimum wage by six months