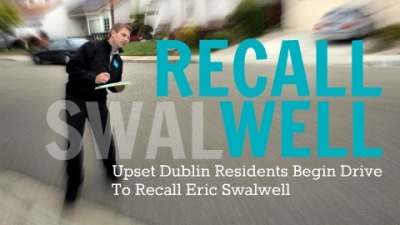 ELECTION ’12//CONGRESS 15 | A long-rumored campaign to recall Dublin Councilman Eric Swalwell now has a web site and a bully pulpit.

The unidentified site makes no mention to a specific group behind the recall campaign, but lays out a litany of charges against Swalwell, a Democrat, who is also running this November for Congress in the 15th District seat currently held Rep. Pete Stark, another Democrat.

Calling Swalwell a “quid pro quo politician,” the site makes numerous reference to the first-term councilman’s controversial ties to housing developers, some who are also large donors to Swalwell’s campaign. “Eric Swalwell will work hard for land developers, but not you,” it reads. As far back as last fall, there had been numerous references to localize dissatisfaction with Swalwell’s recent decisions in Dublin. Some home owners in Dublin have viewed the city’s coziness with developers as detrimental to their own financial interests. Swalwell, 31, was elected to the City Council in 2010.

Although it is not clear whether the recall campaign has a legitimate aim or merely an AstroTurf group hoping to sully Swalwell’s image as his campaign faces considerable pressure from Stark and the entrenched Democratic Party in Alameda County to thwart his efforts to beat the 40-year incumbent this November. However, many of the specific gripes are some of the same issued by AroundDublinBlog, a local web site that has long been a critic of Swalwell’s ties to land developers in the Tri-Valley area, including the controversial project known as “The Promenade.”

That particular project–highlighted on the Recall Swalwell site–was infamously referenced by Stark during a candidates forum last April in Hayward. Stark charged Swalwell with accepting campaign donations from Charter Properties, the land developer behind The Promenade project, in exchange for rezoning the property from commercial to medium to high density residential homes. Stark, however, characterized the alleged arrangement as a “bribe” to great outcry from his opponents

Just a day before announcing his run for Congress last September, Swalwell gained the considerable ire of over 200 Dublin residents at a Sept. 20, 2011 council meeting who opposed the rezoning deal for fear it would further diminishing their homes’ value with greater inventory at the housing project. Swalwell approved the rezoning deal despite the city’s mayor recusing himself from the council’s decision, but oddly appeared in chambers as a public speaker in opposition to the plan.

STARK TRAVELS TO THE BELLY OF THE BEAST With less than four months before the November 6 general election, Rep. Pete Stark is traveling to the eastern edge of his current 13th Congressional District (redistricting will recast the seat as the 15th next year).

Stark will hold his monthly town hall meeting this Saturday at the Pleasanton City Hall chambers at 9 a.m. The new 15th District will include more of the Tri-Valley, including Pleasanton, Dublin, Livermore and a portion of San Ramon in Contra Costa County. The hour-long town hall will surely be a test for the Stark, who has been hounded by some reporters more interested in whether he utters a curt sentence or two over the substance of his race against fellow Democrat Eric Swalwell.

Pleasanton may be Swalwell’s home base, but the meeting could become additionally raucous if typically aggressive Tea Party members join the fray. It’s definitely a combustible situation. However, those more interested in a sedate Saturday morning of government civics can catch Stark’s second meeting in Union City at 11 a.m. (For more info, click here.)

16 thoughts on “AstroTurf Or Not, Residents In Dublin Begin Nascent Recall Campaign Against Swalwell”