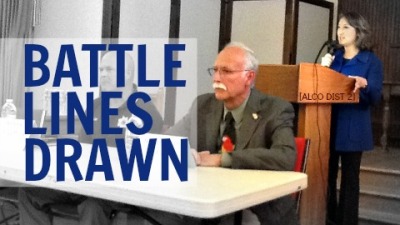 ELECTION ‘12//ALCO SUPERVISOR DIST 2 | The fate of St. Rose Hospital may be entwined with Supervisor Richard Valle’s bid to retain his seat on the Alameda County Board of Supervisors this November. Following a decade on its Board of Directors, the hospital now sees itself teetering on the verge of bankruptcy. For Valle, its resolution could also be his greatest short-term accomplishment since replacing Nadia Lockyer on the board last June. Especially, if a suitable owner is found before Election Day.

With all of the Alameda County’s problems, from crime to high rates of obesity and under performing schools to high unemployment and underwater mortgages, the issue most likely to decide the Board of Supervisors District 2 race resides at a small community hospital just off Winton Avenue in Hayward.

However, the precipitous decline of St. Rose in the past year and not its potential for saving, for Assemblywoman Mary Hayashi, is quickly becoming a point of contention in this race, one of the most watched in the Bay Area.

On Friday in Hayward, Hayashi raised the issue of the county’s inability to manage the situation at St. Rose, which now includes Valle among its membership. “For over a year now, the county Board of Supervisors and Supervisor Wilma Chan has expressed strong concerns about St. Rose Hospital’s serious financial mismanagement that has cost Alameda County taxpayers millions of dollars and taxpayers need to see a strong plan for long term viability,” Hayashi said.

Earlier this year, the Board of Supervisors came down hard on former CEO Michael Mahoney for misleading the group about the hospital’s mounting debt. Alameda County Supervisor Keith Carson, at one point, said Mahoney lied to the board. Following the resignation of Mahoney, who is now reportedly working for Valle’s Union City non-profit recycling company, Tri-CED, a rescue plan for St. Rose including a short term infusion of $12 million was approved.

Funding for the hospital came from the county, Kaiser Permanente and nearby Washington Hospital, but Valle says Kaiser recently pulled up stakes on its $3 million contribution. “We are publicly asking Kaiser, at some point, if that $3 million is needed,” said Valle, “we want them to provide that grant to St. Rose because we sincerely believe they owe that to the community.”

There may be a significant amount of political ammunition available for Hayashi to use against Valle since St. Rose’s dire financial condition was publicly acknowledged in August 2011. As part of a brief flirtation with the nearby Eden Township Healthcare District, St. Rose obtained a $3 million loan to keep it afloat. However, in December, it nearly defaulted on its payments. Earlier this year, St. Rose publicly shopped the idea of merging its facility with San Leandro Hospital, but that plan withered as the Washington Township Health Care District hoped to merge with St. Rose. Hovering over both deals were discussions of Prime Healthcare swooping in to purchase the hospital, although, many at the time viewed the talk as opportunity to gain leverage by the St. Rose Board of Directors over the county. At times, in fact, it has appeared like nobody at any level of local government has a handle on resuscitating the hospital.

Valle blames St. Rose’s chronic struggles on the state of health care in the state and insurance providers, who typically ramp up hospital costs. He also said the board has kept its promise to the Catholic founders of St. Rose. “As health care has spun out of control, out of no fault of St. Rose, no control of the Board of Directors of St. Rose, we would up in a deficit situation because we cannot control–Blue cross, Blue Shield and all of those expensive health care providers,” says Valle. “That’s how we arrived at this situation. We kept our commitment to the sisters and did what the sisters wanted us to do and we continue to do that today.”

It would appear like Valle is playing with a losing hand by basing his campaign on St. Rose, unless the issue can be sufficiently resolved before election day. A sort of October Surprise, maybe? After Friday’s candidates forum in Hayward, Valle confirmed St. Rose Board of Directors are currently in discussion with Lex Reddy, a Southern California businessman with ties to Prime Health, a controversial health provider. Valle added talks between Reddy, who was once Prime’s CEO, are doing well. Recently, Reddy has been meeting with doctors, nurses, Teamsters associated with the hospital, Valle said. “From what I’m hearing, the hospital is beginning to know him and they’re beginning to know each other. So, I’m not hearing anything negative.”

Reddy’s connections to Prime and their controversial business practices such as terminating union contracts and relying on emergency room visits to boost profit margins have come under fire by health care experts who say the practice worsens the state’s overall function of health care. Valle, though, believes any potential deal with Reddy will be thoroughly vetted. “I have confidence in Kamala Harris,” he said. “The attorney general is going to do due diligence and the supervisors are going to weigh in,” said Valle. “There are a lot of eyes in that deal and I believe it is going to get consummated before the election.”