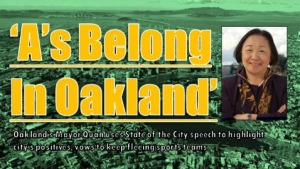 OAKLAND//STATE OF THE CITY | Oakland Mayor Jean Quan, just two years from facing re-election, used her annual state of the city address to face the city’s problem with violent crime. She also used the platform to be the city’s cheerleader-in-chief, not only for its burgeoning arts scene, but its sports franchises.

During Quan’s 73-minute speech she laid out no new plans for quelling the violence on the streets of Oakland already beset with 12 homicides in the first two months of the year. However, Quan did call for leaders in Washington to pass gun control legislation. “If we want to stop the killing in Oakland,” said Quan. “We have to have these federal laws.” Quan said there is no reason for teenagers to access to what amounts to a “machine gun,” but added the city already prohibits the legal selling of firearms. “The guns killing our children were not bought in Oakland,” she said.

With a police force currently at a decade-low of 611 officers, according to report given to the City Council’s public safety committee on Tuesday night, merely hiring additional police officers is not as easy as it may seem. Getting back to a high of over 800 officer–a level not seen since 2009–means recruitment, training and hiring of new cops could cost $73 million, she said, a figure some believe is greatly inflated. Yet Quan says it is doable. “It’s not unreachable,” she said, “but not an easy thing and that’s why we need a community discussion.”

Unemployment is down, new jobs are up and the construction of the BART/Oakland Airport connector continues, said Quan, but a sense of safety still eludes many residents. “As mayor, there is nothing more important to me than the safety of the individual,” she said. However, Quan also said bringing hope to the city’s wayward youth “is as important as hiring new officers.”

Oakland’s growing national prestige as a haven for the creative-minded played prominently in the second half of Quan’s speech. Twitter users under the growing and entertaining hashtag: #oakmtg, instantly turned Quan’s repeated use of the phrase Wednesday night of “shoutout” for comic relief. “Oakland Mayor @JeanQuan seems to think she is giving an Oscar speech not a State of the City Address,” tweeted Oakland resident, @HarryElephante.

Not only did she give shoutouts to many in law enforcement and other city leaders, she curiously mentioned U.S. Attorney Melinda Haag, sitting in the front row, a constant thorn in the side of the city’s cannabis community.

Shoutouts were also reserved for Oakland’s growing list of highly-praised chefs and artists, along with a pledge of support for First Friday, the lively monthly street festival sullied last month by gun violence. This Friday’s event will be dry, she said. “We’re going to spend a little time on the theme of making peace in the world and particularly in Oakland.”

Quan, however, did not reserve a shoutout for Oakland A’s owner Lew Wolff. Early in the speech, she described one of her tough days on the job being meeting with the mercurial owner seemingly bent on moving the team to San Jose. “I got to tell you, we’re not giving up on any of the teams,” she said of the A’s, Raiders and Warriors.

She then equated the city’s uphill climb to save its sports franchises to the A’s memorable come-from-behind run last season to the American League West title and the scene of fans who loudly saluted the team following their playoff loss to Detroit. “Even when we lost that night, it is an experience I will never forget,” she recalled. “We were screaming and shouting and not moving and clapping and we were basically telling Lew Wolff, ‘Now, tell Major League Baseball that this city and these fans don’t care.’ The A’s belong in Oakland.”