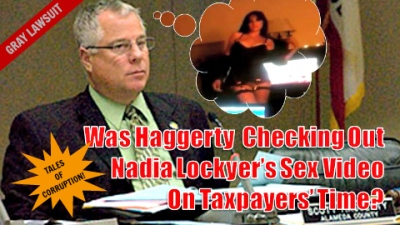 ALAMEDA COUNTY BOS//LAWSUIT | Alameda County Supervisor Scott Haggerty directed county employees to work on his re-election campaign instead of doing their jobs, used the county sheriff to cover-up an alleged arrest and received numerous kickbacks in return for his support, says his former chief of staff in an explosive lawsuit filed in Alameda County Superior Court.

Chris Gray, Haggerty’s chief of staff for 16 years, says he was fired after confronting his boss with the long list of allegations contained in the 28-page lawsuit. In addition, Gray alleges discrimination, retaliation, harassment, along with violations of various labor laws and whistleblower protections.

Fired in the summer of 2012 sometime after a lengthy leave of absence for medical reasons, Gray says in the lawsuit he was terminated after alleging Haggerty was double-billing the county for vehicle miles.

A previously reported allegation by Gray that Haggerty greased the sale of county surplus land in Livermore to developer John Wong in return for the purchase of Haggerty’s home is also included in the lawsuit. Additionally, Gray asserts Wong was directed to buy the home at Haggerty’s insistence and his preferred asking price despite failing to attract any interest from other perspective buyers.

It is not clear which or how many campaigns his staff may have been asked to work, but Haggerty’s was unopposed during his last re-election campaign in June 2012. Haggerty has declined to discuss the lawsuit.

Gray also claims Haggerty used the Alameda County Sheriffs’ Association to cover up an assault charge filed against him by a woman across the bay and most salacious of all that he used a county computer to watch pornography, reportedly including an X-rated video of former Alameda County Supervisor Nadia Lockyer briefly posted on The Citizen last year.

Gray is seeking lost wages of $110,000 annually plus benefits and reinstatement to his job, along with damages.

In addition, the lawsuit accuses Haggerty of extorting interest-free loans from Gray and others, sought kickbacks in return for his support, bought his children a “pig trailer” with taxpayers’ money and used sports and concert tickets at the O.co Coliseum to entertain potential clients for his trucking company. Haggerty is a long-time member of the Oakland-Alameda County Coliseum Authority, the government body that oversees the publicly-owned facilities.

Like Loading...
‹ Officials Raise Hope For Federal Grant To Hire Cops In Oakland; Tax Measure In ’14
Oakland Names Its Third Police Chief In The Last 48 Hours ›