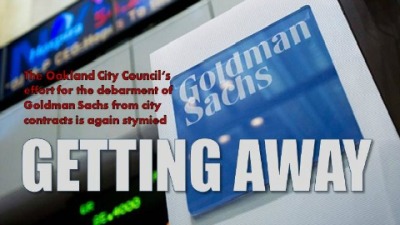 OAKLAND CITY COUNCIL | A draft ordinance that could lead to the debarment of Goldman Sachs from bidding on city contracts is heading back to the City Council with amendments, but not before another round of confusion fostered by the city attorney’s office.

In the past month, the issue of debarment has bounced back-and-forth between committee hearings and the full council to the consternation of some council members who say it already gave clear signals for debarment to the city administrator’s office last year when it approved to begin the process that could ultimately lead to the prohibition of Goldman Sachs from doing business with the city.

However, some members of the Council’s Finance and Management Committee Tuesday morning were surprised to find a last-minute opinion furnished by the city attorney’s office featuring a recommendation against Councilmember Desley Brooks’ amendments. The arrival of the hard copy received just 10 minutes before the start of the 9:30 a.m. meeting, said Councilmember Libby Schaaf, was met with contempt.

“Literally, it was 10 minutes ago that I learned that you issued a opinion that you think we shouldn’t adopt this,” said Schaaf, in comments to an assistant city attorney. Schaaf added she was prepared to approve the item. “It is extremely disappointing after we granted you a two-week extension to prepare this memo and to put something that is this dramatic and changes a recommendation and essentially to give us 30 minutes warning.”

Brooks also reserved critical comments for the late opinion, recounting an email of the opinion she received after 6 p.m. last Friday and just before the extended Memorial Day weekend. Brooks said the city attorney’s opinion is “overly fixated” on her amendments. Most of the edits made to Brooks’ amendments asserting greater control for the council in the debarment process were reverted back under the administrator’s purview, according to Brooks. Instead, she said her aim was merely to “re-insert” the council into the decision-making process, not to cut anyone out.

The debarment issue, however, is quickly becoming a proxy war between the City Council and City Administrator Deanna Santana. The growing power struggle was noted Tuesday by Schaaf. “This issue of what are the appropriate lanes for the council and the administration to be in is an issue that has been cropping up again and again and so maybe at some point we need to have a more robust discussion of that in general because the council is the policy-making body. When we change the law, that changes the law the administrator must enforce,” Schaaf said.

Council President Pat Kernighan urged for an equitable sharing of authority between the council and administrator in the debarment process, but again commented on the prudence of debarment against Goldman Sachs or any other local business. She fears the ordinance could be used by determined council members against businesses or corporations they do not like.

Paul Jung of the Oakland Metropolitan Chamber of Commerce echoed Kernighan’s statements. “There is no need to rush to do anything,” Jung said. “There will be countless other businesses trying to conduct business that might be subject to political whims that you should not decide before you’re piqued, angry at some delay in getting something done.”

Councilmember Rebecca Kaplan, however, said the proposed ordinance has safeguards and could not be used by council members to wage political vendettas since any debarment must be agendized and heard before the full council.

The controversial rate swap deal between Oakland and the Wall Street behemoth turned bad for the city, ultimately costing it millions annually. Although debarment will do nothing to make the city whole following the rate swap debacle exacerbated by the Great Recession, but some city officials say the move could have symbolic ramifications for how the city expects to be treated by financial institutions in the future.

2 thoughts on “Goldman Sachs Debarment Heads Back To Oakland Council, But Not Without Added Confusion”