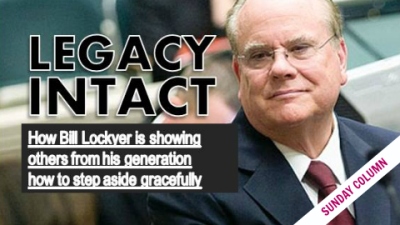 SUNDAY COLUMN | Despite your party affiliation or disdain for his last few years in office, there is no doubt Lockyer is one of the East Bay’s greatest political minds ever. Lockyer this week announced he will retire after serving the last 18 months of his term as state treasurer.

From the San Leandro school board in\1968 to his easy re-election victory for treasurer in 2010, Lockyer amazingly never lost an election. In fact, rarely did he even come out on the losing end of legislation while serving the East Bay in the Assembly and leading the State Senate.

Lockyer’s body of work in Sacramento includes limiting your potential service for jury duty to once a year (unless chosen to serve), authoring hate crime legislation and focusing on crime-solving technology featuring DNA matches to solve crimes.

However, Lockyer’s most lasting achievement may be the bill paving the way for the San Francisco Bay Trail that will ultimately feature 500 miles of biking and walk paths encircling the entire region. He did something else important by also announcing he would not run for state controller next year.

Lockyer this week showed the rest of the state’s septuagenarian class of political heavyweights how to step aside and enjoy the accolades that come from decades of public service. The generation of Sens. Dianne Feinstein and Barbara Boxer, along with Gov. Jerry Brown, likely have only a few years left in them and those in the East Bay saw how not to leave the limelight gracefully with the fall of Pete Stark’s equally legendary 40 years in Congress.

A similar fall from grace could have befallen Lockyer in 2014 had he did not choose retirement. The pieces were in place: an old, entitled politician looking for another safe landing place following two terms each as attorney general and treasurer. The controller’s office seemed a bit too much in light of his troubles with his wife, Nadia Lockyer’s precipitous fall from Alameda County supervisor and resignation to turning herself into rehab for drug and alcohol dependency.

In fact, Lockyer had lost much of legislative power he once possessed. All that remained was his connections and prodigious campaign war chest, which at $2.2 million, will still make him everybody’s best friend come next year.

Unlike Stark, Lockyer heard the footsteps behind him getting louder and noticed his political moves were not as deft as years past. So, he kindly and graciously stepped aside. What we won’t be doing is talking about his downfall, instead, we’re all here to praise his prodigious services to the citizens of the East Bay and the entire state.

Quotable
“We should feel lucky to have a place like this in Hayward.”
–Greg Jones, Hayward council member, June 4, praising the owners of the city’s long-time poker club on Mission Boulevard.

The Week That Was

>>>Back in business: Mary Hayashi is in between offices right now, so why not use her expertise in health care and the halls of the Legislature to her advantage? Hayashi, who is a likely candidate for the state senate in the Hayward-Fremont area next year against Assemblyman Bob Wieckowski, now has her own consulting business specializing in helping health care organization navigate the corridors of power in Sacramento.

>>>In the ‘Dro: The San Leandro City Council approved the first two-year budget in its history. The $124 million budget includes the use of $1.4 million in general fund reserves in the next fiscal year. Despite rhetoric sounding the budget alarm by its mayor over the years, San Leandro continues to be blessed with fewer impacts on its financial house than many other neighboring cities in Alameda County. The city’s school district also has a new superintendent. Mike McLaughlin was named to the post this week replacing the retiring Cindy Cathey.

>>>I’ll raise you 2 tables for $210k: Hayward’s City Council approved new conditions on its lone poker club this week allowing for an additional two tables and expansion of the building on Mission Boulevard. The item passed, 6-1, with only Mayor Michael Sweeney registering dissent. The new deal may also net the cash-starved city over $210,000 in revenue. On Saturday, Hayward’s school board also filled its vacant supe position by bringing back Stan Dobbs, who left the district last November for San Diego Unified.

>>>Retirement parties: Oakland native and Hayward resident Bill Lockyer isn’t the only person hanging them up. Alameda’s Jason Kidd also announced his retirement after 19 seasons in the NBA. The future Hall of Famer is one of the greatest athletes ever produced in the East Bay. In fact, over the last quarter century no single athlete from this area has come close to capturing the imagination of sports fans than Kidd.

Tweet of the Week
“Jason Kidd’s retirement > Bill Lockyer’s retirement”
-@calderon11 tweeting, June 3, about the retirements of two legends of local sports and politics hanging them up this week.

Best Reads
>>>Ro Khanna, the former Obama Commerce Department veteran running against Rep. Mike Honda in the South Bay’s 17th Congressional District is featured in this week’s Time magazine. You have to pick up a copy to read the entire article, but here’s a preview with extras. (Time.com, June 6).

Voice of the People
“She might “steal the election” !!!!!!!!”
–Anonymous, commenting June 6 about Mary Hayashi’s prospects for the state senate next year on “Hayashi Bides Time As A Health Care Consultant”.