Home › Alameda County Board › Is The Kingdom Of Miley Crumbling?

Is The Kingdom Of Miley Crumbling? 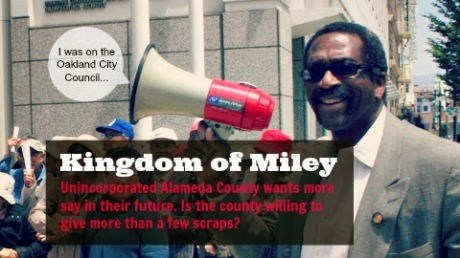 ALAMEDA COUNTY | CASTRO VALLEY | Alameda County’s unincorporated areas make up nearly a tenth of its population, yet they enjoy fewer avenues for direct representation than the rest of the county. Most of these residents rely on Alameda County Supervisors Nate Miley and Wilma Chan for governance. But, while an opportunity to shape the unincorporated areas future for the next five years is presented this weekend, an inconsistent and piecemeal approach to the region, primarily in Castro Valley, is again raising the question of self-determination.

This Saturday, unincorporated residents and business owners in Castro Valley, San Lorenzo, Fairview, Cherryland and Ashland, will be asked to choose five overreaching goals for the next Eden Area Livability Initiative (EALI). The charrette, the final phase of EALI’s collaborative planning effort, will cover areas of interest including agriculture and environment; economic development; education and public safety. However, it is the area of governance that sparked a bitter feud last month between some Castro Valley residents defending themselves against others from their smaller, somewhat less affluent unincorporated neighbors.

During an earlier EALI group meeting, a last-minute effort to include a controversial proposal allowing representation for San Lorenzo, Fairview, Cherryland and Ashland residents on Castro Valley’s seven-member Municipal Advisory Council (MAC) was met with derision. The Castro Valley MAC, however, is entirely appointed by Supervisor Miley and serve at his pleasure. The council acts as Castro Valley’s de facto local government, yet contains no real power other than to advise its county supervisor.

Nonetheless, talk of including other unincorporated areas to the MAC and further diluting its scant authority comes on the heels of an admittedly small, but vocal group of Castro Valley residents again raising the question of cityhood. In the meantime, Castro Valley resident Michael Kusiak and others have been applying pressure on Miley to make the MAC an elected council. Opposition to the idea from current MAC members reason, among other things, campaign costs would make running for office difficult. In addition, the MAC already has difficulty attracting volunteers willing to serve.

Kusiak says, with the current model of governance, the unincorporated areas are plagued by a large maze of local county bureaucracies that leave residents in the dark over whom to reach for help. However, he also realize the time for incorporation is not now with a foundering local economy and the absence of vehicle license fees and hotel taxes to act as an initial flow of revenue for the potential nascent city. Previous attempted to incorporate, most recently in 2002, have failed.

Yet, just as Castro Valley, the largest unincorporated municipality in the state with a population of over 61,000, searches for greater representation, neighboring residents mocked it for the perception, among some, it revels in a higher standard of living over places, such as Ashland and Cherryland. The hyperbole at the EALI meeting last month, in fact, often times resorted to describing the divide as analogous to dismal class and race relations. “We don’t want to bring you down, we want to join you,” said Keith Barros, the San Lorenzo resident who first broached the idea, without discussion, in September for integrating Castro Valley’s MAC. Barros, though, later said Castro Valley residents were treating its unincorporated brethren as “second-class citizens.”

David Ashton, a native of Castro Valley, called Barros’ move “underhanded,” and charged him with “hijacking the meeting” near its end last September. “This is the worst kind of chicanery,” he told Barros at the subsequent meeting in October. “Really despicable.” Barros, in fact, was given nearly a dozen opportunities by Miley to speak during the contentious hour-long discussion. When Barros wasn’t stating his case he could be seen–in the middle of the debate–chatting with Miley outside the meeting room at the Castro Valley Library.

A revote eventually nullified the attempt to get the reformed MAC proposal on Saturday’s ballot, but nonetheless revealed two camps of marginalized communities fighting over the crumbs of little tangible power and representation.

In the past, Miley has publicly described a willingness to be flexible to the demands of residents in what has become a virtual fiefdom outside of his supervisorial stronghold in Oakland. His passivity was seen last month when a resident sincerely asked for his opinion over the practicality of the MAC proposal. “As far as I’m concerned, we can live with the reality, either way.”

However, many county observers over the years say the relative autonomy Miley enjoys in Castro Valley and the rest of the unincorporated areas would be hard to pry away. In fact, the spoils of the last EALI in 2008 led to dramatic streetscape improvements to Castro Valley Boulevard and Lewelling Boulevard. It also led to the gleaming Ashland Youth Center, which opened this year. A long-time former Alameda County public official recently told EBCitizen the center is Miley’s legacy monument and predicted, “How much you want to bet his name is on that building before he dies?”