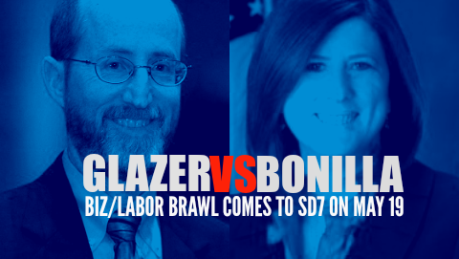 STATE SENATE | 7TH DISTRICT | Voters in the 7th State Senate District, at least the few who participated in Tuesday’s special election, gave centrist Democrat Steve Glazer a seven-point win over Assemblymember Susan Bonilla. Since no candidate attained a majority of the vote, the campaigns will reload and meet again in the May 19 runoff.

The result suggest the state senate district not only reacted positively to Steve Glazer’s centrist platform, but also issued a rebuke to an apparent behind-the-scenes move by labor to undermine his campaign.

A labor-backed independent expenditure committee named the Asian American Small Business PAC made waves in recent weeks for spending over $100,000 to support the lone Republican in the race, while also opposing Glazer’s campaign.

The scheme, once exposed, seemed to have backfired on labor, who vehemently oppose Glazer for his stance against public transit strikes like those that occurred with BART in 2013.

With all of the precincts reporting in both Contra Costa and Alameda Counties, Glazer lead the five-person field with 32.8 percent of the vote. Glazer easily topped the field in both counties. “It was a good night tonight,” said Glazer’s Facebook page. “We are headed to the runoff on May 19th!”

Bonilla held off former Assemblymember Joan Buchanan, both Democrats, for the second spot with 24.9 percent. Although, Bonilla more than held her own in the much larger portion of the district within Contra Costa County, she finished a distant fourth in Alameda County and behind a candidate who dropped out the race last month.

Buchanan, who may have been more well-known to a slight majority of voters finished with 22.6 percent.

Republican Michaela Hertle returned a strong showing Tuesday night, especially since she dropped out of the race last month and endorsed Glazer’s campaign. Hertle earned a fourth place finish with 17 percent of the vote. Democrat Terry Kremin garnered 2.8 percent of the vote.

Voter turnout, which had become a positive development in this special election, failed to generate much interest on Election Day. In both counties combined, participation was just 20 percent of registered voters, which count nearly 488,000. In Alameda County, for instance, just over three percent of voters cast a ballot on Tuesday.