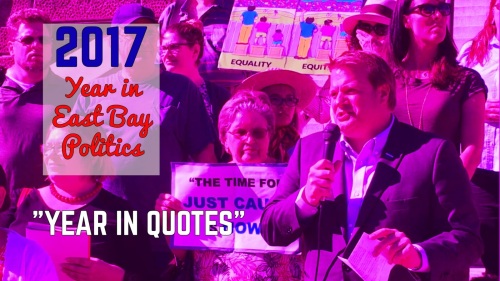 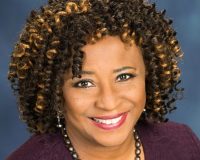 “My friends’ first question is not why am I running for DA. The first question is ‘have you lost your mind?’
–Oakland attorney Pamela Price, in June, announcing her candidacy to challenge Alameda County District Attorney Nancy O’Malley in 2018. Indeed, Price faces an uphill battle, but her early fundraising numbers proved positive.

“The pharmaceutical companies contributions are a cancer.”
–Freshman Rep. Ro Khanna, after an amendment in January to allow prescription drugs from Canada in a health care bill fails. He then lashed out at 13 fellow Democrats who voted against it.

“You said, ‘You had our back.’ Well, tonight as a council, I’m proud to say that we have your back.”
–Alameda Councilmember Jim Oddie, in January, referencing community support prior to a vote on becoming a sanctuary city.

“We are calling bullshit on that.”
–Oakland Mayor LIbby Schaaf, at a rally at the Coliseum in March, in response to the Raiders and NFL officials who suggested the city and county haven’t provided a suitable plan build a new stadium in Oakland.

“I also have tickets for the African American Museum.”
–San Leandro Mayor Pauline Russo Cutter on why she would not be attending Trump’s inauguration even though she was in Washington attending the annual Mayors’ Conference.

“The first thing they tell me is, ‘I’m scared’.”
–Hayward Councilmember Francisco Zermeno, who is also a long-time Spanish professor at Chabot College, on the fear some students have expressed to him about Trump’s proposed policies against immigrants.

“Who are his loyalties with?”
–Rep. Eric Swalwell questioning President Donald Trump‘s ties to Russia and why he won’t release his tax returns during an interview in February with Yahoo News.

“We have to be honest with people. Local police departments don’t have the authority to stop the federal government from carrying out their laws any more than we can’t stop the I.R.S. from going after tax evaders.”
–Hayward Police Chief Mark Koller addressing the City Council’s Community Task Force on anti-discrimination in March.

“Stand with us on the right side of history.”
–Oakland Councilmember Abel Guillen in March after passage of resolution opposing Trump’s border wall.

“I can only imagine the threats to tenants.”
–Alameda Councilmember Marilyn Ezzy Ashcraft in May describing her experience with landlords angry about the city enacting just cause restrictions on evictions.

“Colleagues, our system is broken. I haven’t talked to any of you who disagree. The issue is how do we fix it?”
–Assemblymember Rob Bonta, in June, just prior to the Assembly narrowly defeating his ambitious bail bond reform bill by just a single vote..

“I believe some people should be deported.”
–Alameda County Sheriff Gregory Ahern in June at a town hall in unincorporated Alameda County.

“Whoa”
–Rep. Barbara Lee tweets after her nearly 17-year quest to overturn the 2001 Authorization for the Use of Military Force (AUMF) finally takes one small step forward when a House committee approves its inclusion in a defense appropriation bill. Speaker Paul Ryan, though, later removes the amendment.

“I hope he continues to fail.”
–Assemblymember Rob Bonta tells the Oakland City Council in November to take solace in the fact President Trump’s continually fails to move legislation.

“We get to decide the fate of our community.”
–Oakland activist Alvina Wong of the Stay the Right Way group that opposed the A’s proposed ballpark next to Laney College.

“The most critical thing is to not allow the status quo to speak to itself. That bubble must be popped.”
–Alameda resident Gabrielle Dolphin in January on the need for Bernie Sanders supporters within the state party to challenge status quo Democrats. She would later win a delegate seat.

“We are in the age of Trump and Ahern.”
—Pamela Price, speaking at a September town hall in Alameda featuring 2018 progressive candidates in which she linked Alameda County Sheriff Gregory Ahern’s policies toward immigrants and minorities to the President. 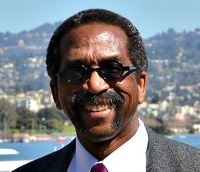 “Pretty strong words… I hope you can back that up because those are slanderous remarks at an elected official.”
–Alameda County Supervisor Nate Miley at a meeting in San Lorenzo last October in response to a local Realtor who repeatedly calls him a “criminal.”

“Don’t know if I can win.”
–Alameda Councilmember Frank Matarrese not exactly trumpeting a confident tone in October about his chances for winning next year’s mayoral race in an email to housing activists.

“The selection of our new Fire Chief should not be driven by unseemly political pressure.”
–Alameda City Manager Jill Keimach writes in a memo to the City Council alleging some of its members violated the City Charter by interfering in her selection of a new fire chief.

2016 – Desley Brooks. “I would love to see the day Libby Schaaf puts her white privilege aside.”
2015 – Trish Spencer. “I have many Filipino friends. Our children grew up… eating rice — white rice!”
2014 – Libby Schaaf. “It’s hella time for leadership in Oakland.”
2013 – Tori Campbell. “Captain Sum Ting Wong, Wi Tu Lo, Ho Lee Fuk and Dang Ding Ow.”
2012 – Pete Stark. “If I we’re a lawyer–I would call that bribery, but I’m not a lawyer, so I’ll let Mr. Swalwell define what he thinks taking all this money from people he gave special zoning privileges is.
2011 – Ken Pratt. “I nominate her [Jean Quan] the queen of residential blight.”
2010 – Bill Lockyer. “I’m just a volunteer.”
2009 – Pete Stark. “Well, I wouldn’t dignify you by peeing on your leg. It wouldn’t be worth wasting the urine.”