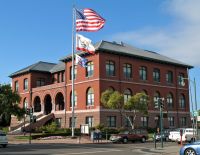 ALAMEDA CITY COUNCIL
For the third time in as many months the Alameda City Council has scheduled a special closed session meeting, this one set for next Monday, April 16, 5 p.m., to discuss the growing political scandal pitting City Manager Jill Keimach against the City Council.

The agenda released Monday afternoon references up to three potential lawsuits and, somewhat ominously, the potential dismissal of Keimach.

The first item references a discussion with legal counsel “relating to the allegations made in City Manager Jill Keimach’s October 2, 2017 letter. Number of cases: Three.” The three potential lawsuits are presumably Keimach and two councilmembers.

While Keimach’s October letter made no mention of which elected officials allegedly interfered with her City Charter-supported powers to hire a new fire chief, one media report at the time named Councilmembers Jim Oddie and Malia Vella. Both have used past campaign contributions to pay for legal representation, according to recent finance reports. Both have also denied the accusations.

An additional closed session item suggests Keimach’s termination or “release” from her duties as city manager will be discussed during the same closed session. Keimach was surprisingly placed on paid administrative leave on Mar. 9 for yet unknown reasons.

The current series of events that has paralyzed City Hall began last October with a letter sent by Keimach to the council that complained of “intense political interference” by some members to select a firefighters union-backed candidate to be the city’s next fire chief.

Subsequently, the council voted on Oct. 17 to launch an independent probe of the allegations contained in the letter. In late January, the council is believed to have received the report, but after a five-hour special closed session, no decision was reported by the city attorney.

Last month, a similar special closed session also lasted nearly five hours. While the council made no comment about the investigative report, it did issue a surprise announcement that Keimach had been placed on paid administrative leave. No reason was given for the move by the city. But a statement by the council suggested the contents in the investigative report would be released in coming weeks.