Sandra Spagnoli, who was San Leandro’s first-ever female police chief when she was hired in 2011, is facing serious questions at her new job leading the Beverly Hills Police Department.

Beverly Hills officials earlier this month settled a large $2.3 million settlement that claimed, among other issues, that she denied promotions to a Jewish police captain because of his religion and that she made racist comments.

Additional complaints allege sexual misconduct by the police chief that includes sex with subordinates who were later promoted.

The Beverly Hills City Council approved the settlement Dec. 4 rather than go to trial against a former police captain, according to the Los Angeles Times. But the complaint is one of nearly two dozen civil lawsuits and official complaints against Spagnoli, who left San Leandro in March 2016. 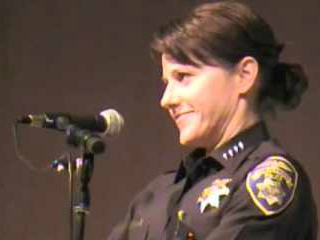 Spagnoli is also the first woman to helm the Beverly Hills Police Department. Numerous articles in Southern California heralded the hiring of Spagnoli’s in Beverly Hills as a game-changing event within a police department traditionally led by men. The same was said of Spagnoli in San Leandro.

Spagnoli has denied the claims in Beverley Hills, according to the Times. In addition, a statement by the city acknowledging the settlement also denies the claims.