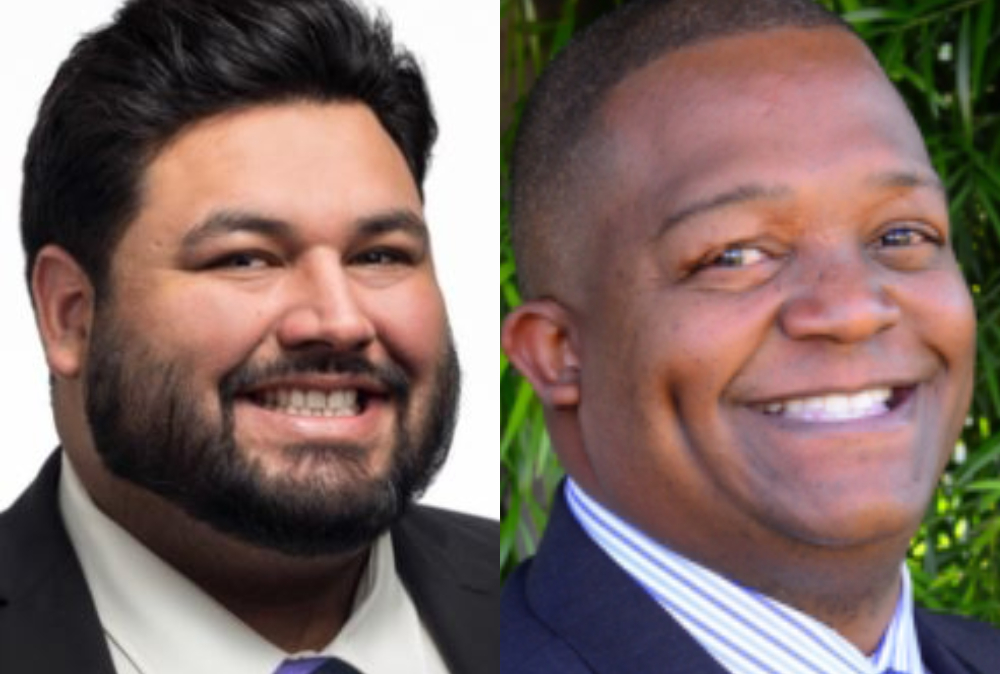 San Leandro school board member Victor Aguilar, Jr., left, admitted to building a fence on his property without city permits at the same time he criticized his opponent in the District 3 race last November, now former Councilmember Lee Thomas's own application for a fence.

A few hours after San Leandro Councilmember Victor Aguilar, Jr. was grilled last Thursday night by a planning and zoning commissioner who took umbrage with his attempt to secure a zoning variance for a fence he constructed without a permit, Aguilar took out his anger on former Councilmember Lee Thomas, the man he upset in the November elections, and who Aguilar believes is behind a growing controversy at city hall.

The San Leandro Planning and Zoning Adjustments Commission rendered no decision Thursday night on Aguilar’s application to keep his unpermitted redwood fence without any modifications, but not before being lambasted by Commissioner Mike Santos, an appointee of Councilmember Corina Lopez, for putting the board and the city council in the unenviable position of appearing to favor the personal wishes of an elected official.

I think the content of your character is sour because you can’t accept defeat. Your stance is more political than rational. This issue is about a fence not a political race.”-San Leandro Councilmember Victor Aguilar, Jr. blasting former Councilmember Lee Thomas on LinkedIn.

Earlier in the day, former San Leandro Councilmember Diana Souza also had sharp words for Aguilar, writing a letter to the local newspaper that criticized him for using Thomas’s attempt last year to build a fence on his property as fodder for a negative campaign against Thomas. It now appears Aguilar was well aware that he had constructed his fence without requisite permits even as he was criticizing Thomas, who, at the time, was seeking approval for a variance before constructing his enclosure.

In a rare public display of hostility by a local elected official toward a former rival, Aguilar posted a message on the social media site LinkedIn Thursday night, saying Thomas was bitter about losing the election, un-neighborly, and stubborn.

“I am in the process of going through the proper steps to become complaint. I think the content of your character is sour because you can’t accept defeat. Your stance is more political than rational. This issue is about a fence not a political race,” Aguilar wrote.

“Your lousy attitude and lack of respect for your neighbor demonstrated to the community your ability to lead. You do not represent the values of the community. However, you did build your fence to spite your neighbor. I can’t believe you couldn’t stomach the channel to compromise; stubborn. I will be in compliance.”

Thomas re-posted the screed soon after Aguilar posted it on the site, suggesting it was triggered by Souza’s letter published Thursday morning in the San Leandro Times.

“No resident should have to fear an elected official or be attacked on social media because they wrote a letter to the editor,” Thomas wrote in a Facebook posting that includes Aguilar’s comments.

Souza attended Thursday night’s planning commission meeting and appeared to have filled out a speaker card for public comment, but did not do so. Instead, she viewed the hearing from the doorway. Her letter to the editor may have said it all as it questioned Aguilar’s character and willingness to skirt the city’s rules and regulations.

“Really[?] Councilmember Aguilar, then a sitting trustee on the San Leandro School Board, and who was working on his campaign to run for City Council, did not think to see if the same ordinance applied to this fence extension? Or was he hoping that he would not need to comply with the process if he got his fence built before the city knows? What does this tell you about his character and commitment to our city’s ordinances and processes?” Souza wrote.

There is no evidence, only conjecture from Aguilar, that Thomas is the individual who issued an anonymous complaint about his fence, which at its longest is 42-feet and higher than 6-feet-tall.

In an interview following Thursday meeting, Aguilar admitted he knew his fence required a permit prior to having it built sometime in 2017 and would only seek a variance in the event someone complained to the city.

Aguilar expressed a willingness at Thursday’s meeting to follow any determination made by the planning and zoning commission. At the same, he appeared cool to any proposal to bring his fence into compliance with city codes, either by lowering it by roughly two feet or moving the structure five feet closer to his home.

A year ago, San Leandro elected officials showed little taste for the distraction that followed a neighbor’s high-profile opposition to Thomas’s intent to extend a fence on his property. Thomas’s later pulled his application and built his fence to existing code. This time around, councilmembers and members of the planning and zoning commission appear doubly reticent about weighing-on Aguilar’s desire to keep his fence, as is.

There is also questions of whether Aguilar’s recent moves are tone-deaf to a public that is not likely to appreciate an elected official pursuing his own self-interests, in this case, a fence built without permits, all the while, expending extra city staff time and taxpayers’ money to satisfy his goal.

Since the planning and zoning commission did not render a decision Thursday night, the city is required to re-notice the item, which includes additional costs, including posting the item in the local newspapers before it comes back to the commission on Aug. 1.

Due to covid-19, Hayward set to delay increase to its minimum wage by six months