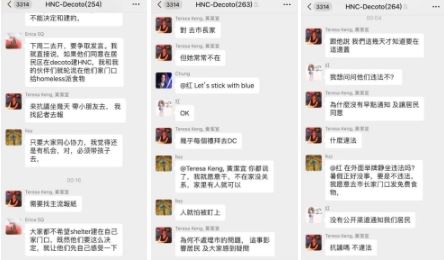 The online conversation on WeChat includes hundreds of members who have used the popular messaging app to discuss and organize opposition to the Fremont City Council potentially placing a Homeless Navigation Center in the city’s Decoto neighborhood.

Erica SQ: Nobody wishes for a shelter to be built @ their own doorstep. Since this is what they decided, then they should get a taste of their own medicine.

Two locations are under consideration for the facility. City staff rated a location near Fremont City Hall as a potential first choice, followed by the Decoto location.

Opposition among Decoto residents has reached a fevered pitch in recent months. Some are highly critical of the city, for what they believe has been a poor outreach effort to Decoto residents. Others fear the homeless facility will cause a rise in crime. As a result, some residents have argued the navigation center will lower the value of their homes.

Within this context, Keng, in a series of messages, appeared to goad Decoto residents into demonstrating at Mei’s home. The group has lashed out at Mei for a perception they hold that she supports placing the navigation center in the Decoto area of Fremont.

The messages obtained by the East Bay Citizen are written in Chinese and translated independently by two people. An English translation is located below. 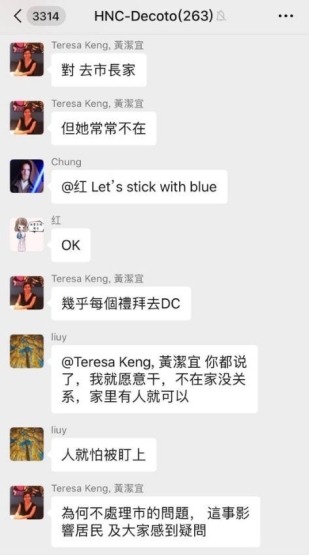 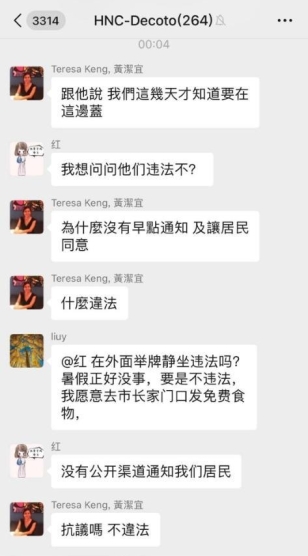 “I’ll be blunt, if they agree to build HNC [Homeless Navigation Center] in the residential district of decoto, then me and my associates will take turns passing out food to the homeless @ their own front doorsteps,” a commenter using the handle, “Erica SQ,” said.

Keng responded that the protests should be lengthy and include children. She also offered to personally attract the attention of the news media to the demonstration. “Come protest a few days, bring children with you, I’ll get reporters for coverage,” Keng wrote.

“Nobody wishes for a shelter to be built @ their own doorstep,” “Erica SQ” wrote. “Since this is what they decided, then they should get a taste of their own medicine.”

Over the weekend, Keng denied posting Mei’s address on WeChat, as reported last Saturday. The series of messages obtained do not show Keng offering the mayor’s home address.

In a posting on Facebook on Sunday, Keng also denied encouraging opponents of the homeless navigation center to demonstrate at Mei’s home. Instead, Keng claimed she instructed the opponents to offer their concerns at Fremont council meetings, not at the mayor’s home. Keng made the same assertion in an interview on Tuesday afternoon.

“I have never in group chat or private conversations given out anyone’s home address or encouraged them to do so,” Keng wrote. “People said if [the] city was to force a center in their neighborhood, they would go protest at their homes. And I responded for people to come to council meeting[s] to express their opinions, one way or another.”

The messages show Keng not only advised and supported the call to demonstrate at the mayor’s home, but also appeared to confirm to another commenter that doing so was legal. “Protesting? Not violating law,” Keng said, in response to another comment.

In another statement posted Tuesday on social media, Keng made a similar declaration that she did not post the mayor’s address, but backtracked on whether she had actively endorsed the idea of demonstrating at Mei’s home.

Keng said, in an interview, that she did not currently possess the WeChat messages, although, she had unsuccessfully attempted to access them on the app. When asked if she had simply forgotten the details of the roughly six week-old online conversation, Keng reiterated that she never advocated that protesters bring their concerns to Mei’s home.

Protesters taking their arguments to an elected official’s home is not unique. Oakland Mayor Libby Schaaf has endured early morning protests at her home in recent years. But those demonstrations were facilitated by city activists, and not with fellow members of the city council within their ranks, as is the case in Fremont.

Keng also denied Tuesday that she had fomenting the fears of Decoto residents who oppose the navigation center. Instead, she described herself as an independent arbiter on the issue. An overflow audience of hundreds of residents at a Fremont council meeting in July, however, appeared wildly supportive of Keng’s efforts on the navigation center issue. She confirmed that when speaking to the throng after the lengthy meeting, some in the audience called for her to run for mayor.

In the WeChat messages, and in an interview, Keng expressed views that suggested she is leaning against placing the navigation center in the Decoto area, although she has previously voted for the facility in general terms. “Why not take care of other city problems, this situations is affecting residents and casting doubt for everyone,” Keng wrote in the chat.

In the interview, Keng was critical of Mei’s handling of the July council meeting, saying, “People are questioning transparency,” Keng said, adding that the July meeting, which did not include the navigation center issue on the agenda, angered some residents who waited to speak until the late hours, but were not allowed after Mei cut off testimony shortly before midnight, as per council rules. “If you have 90 percent residents saying they don’t want something, do you want to ignore people’s concerns?” Keng said.

She also questioned Fremont Police’s belief that the navigation center will be safe for residents. “Police are saying it is safe,” Keng said. “But we don’t know.”

A portion of the online conversation also includes chilling comments in light of Fremont’s history with violence against against public officials. In response to Keng, who claimed Mei is rarely at home and, instead, spends her time traveling to Washington, D.C., a commenter calling themselves “Liuy,” wrote, “you said it, I’m willing to do it, no matter if she’s home or not, as long there is someone in the house… People are afraid of being watched.”

Over three days in 1998, Fremont resident Rodney Blach directed his anger toward public officials by firebombing the homes of then-police chief Craig Steckler, then-councilmember Robert Wasserman, and a Muslim family. Blach was later convicted and sentenced to 37 years in prison.