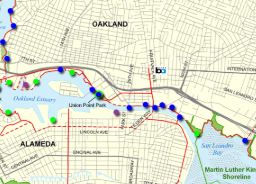 The blue dots in the center of the map along the Oakland-Alameda estuary are part of the Alameda City Council discussion Tuesday night on the future of its waterfront access points.

>>> ALAMEDA CITY COUNCIL (Oct. 1, 7 p.m.) –  Item 6C
ESTUARY PIRATES – The long-simmering issue over a set of historic public pathways pitting the city against residents whose properties abut connections from the street to the estuary comes before the council this week. Neighbors have complained about lewd behavior in the areas in past and want to restrict access. Six such pathways are recommended to be transformed or upgraded for greater public use. Neighbors along the estuary say the areas attract so-called “estuary pirates,” among others, who sail near properties in search of stealing property left on docks. AGENDA

>>> OAKLAND CITY COUNCIL (Oct. 1, 5:30 p.m.) – Item 9.2
SHELTER EMERGENCY – A shelter crisis declared by the Oakland City Council two years ago is set to expire on Oct. 3. The council will discuss declaring another shelter crisis, along with an amendment focusing on inoperable vehicle at homeless encampment and the lack of a city policy on the issue. AGENDA

>>> TRI-VALLEY (Oct. 1, 7 p.m.)
DUBLIN will review its inclusionary housing rules in comparison to its Tri-Valley neighbors. Developments of 20 or more units is currently required to set aside 12.5 percent of them for affordable housing. In-lieu payments cost nearly $200,000 per unit. Dublin has a much higher bar for the requirements to kick in as opposed to its neighbors, according to a staff report. AGENDA… PLEASANTON, meanwhile, will hold a public hearing on a proposal to demolish one single-family home in order to replace it with three. AGENDA.

>>> TRI-CITIES (Oct. 1, 7 p.m.)
FREMONT will award a $17.6 million contract for construction of its downtown Event Center and Plaza project, which is part of the city’s planned civic center area. AGENDA.