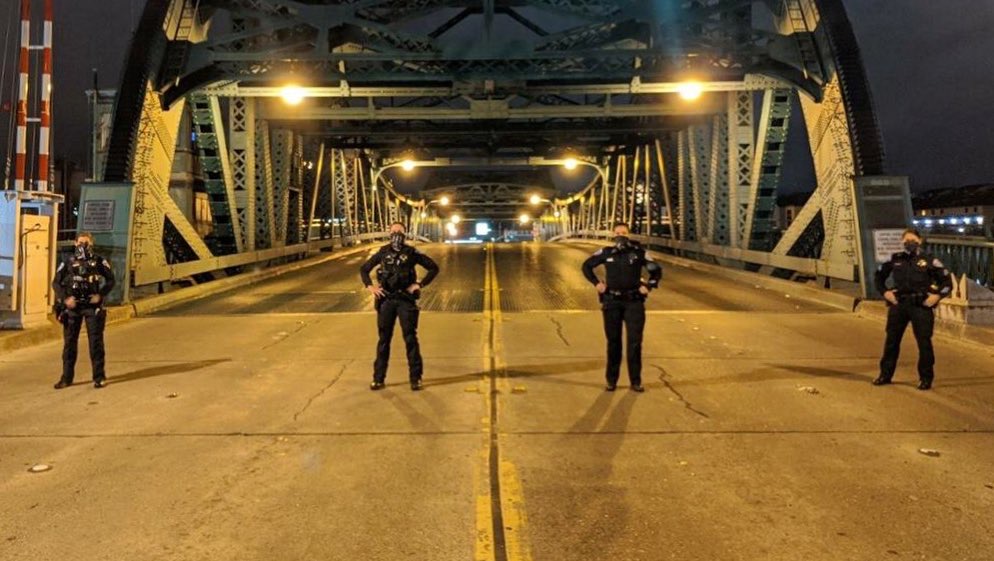 The image, posted on Tuesday, but later deleted, showed the female police officers, each wearing protective masks, and spread out across the Alameda side of the Park Street Bridge. It’s intent was to praise the female officers working during the covid-19 pandemic, the Alameda Police Twitter feed noted.

But Twitter users saw it differently. Many labeling the tweet as tone-deaf at best, and ignorant of Alameda’s historical legacy, at worst.

To many minorities the image conjures up memories of the city’s long-ago history for using its bridges as physical and metaphorical barriers for keeping minorities in Oakland from traveling to the island city.

“Yeah this is bad P.R.,” Amy Rumberger, an Alameda resident, tweeted. “Looks like they’re stationed to keep ‘those people’ in Oakland out of ‘our’ town. What were they thinking?”

It's not about the race of the officers. It's about the image + text suggesting that Alameda needs to be guarded from the people of Oakland at night, and the racial implications of that.

The “raise the bridges” sentiment often espoused generations ago has greatly subsided as Alameda has become one of the most diverse cities in the region. But allusions to the act of raising the bridges at night is often revisited seemingly whenever discussions about protecting the city from crime is broached.

Earlier this year, the Alameda City Council renewed discussions about installing fixed-mounted Automated License Plate Readers at the entry and exit points of Alameda, including the intersection shown in Wednesday’s tweet.