Hayward school trustee calls out colleague for her white privilege

A proposal by a white Hayward school board member to create an “antiracist agenda” policy was met with resistance after the board’s sole black board member called out her “privilege” during a meeting on Wednesday night.

Walker accused Oquenda of creating a policy and attempting to move it through the school district administration without board input and without acknowledgement of the work already being done by the board. “You’re really speaking to me with your privilege tonight, to be honest,” Walker told Oquenda.

Walker said she supports the intent of the proposal, but added Oquenda’s policy initiative was not pursued in an inclusive way. Earlier in the meeting, Walker played audio of a board meeting in 2017 in which she asked for similar policies to help the school district’s black students. However, there has been little movement toward that goal during her eight years on the board, Walker later commented.

“Why are we fast-tracking this? Is this a white privilege move? That’s what I’m feeling like,” Walker said.

“I know I am emotional right now, but I am unapologetically black,” Walker continued. “This means a lot to me. I’ve been working on this for years and I don’t think it should be dismissed because what has been happening in the last 30 days when we’ve been working on this for the last 400 years.” Walker’s reference to the last month is the social activism that has followed the death of George Floyd.

Hayward school board member Luis Reynoso went further asserting the perceived rush to implement the anti-racist policy is because a majority of the current board is white. He later said the three white board members were engaging in “political pandering.”

“I’m actually offended,” Reynoso said. “The way we’re being portrayed right now, as if we weren’t doing anything. As a matter of fact, now we have three white-majority board members–just because they felt like taking actions now–now the staff is moving forward on something.”

Reynoso also criticized Oquenda’s policy proposal for not including Latinos. “I want people to understand when I say, Black Lives Matter, of course, they matter,” Reynoso said. “But when I say All Lives Matter, too, don’t forget there are so many kids in cages that look like me at the border. There’s so many families that are separated that look like me at the border. Don’t forget about them.” 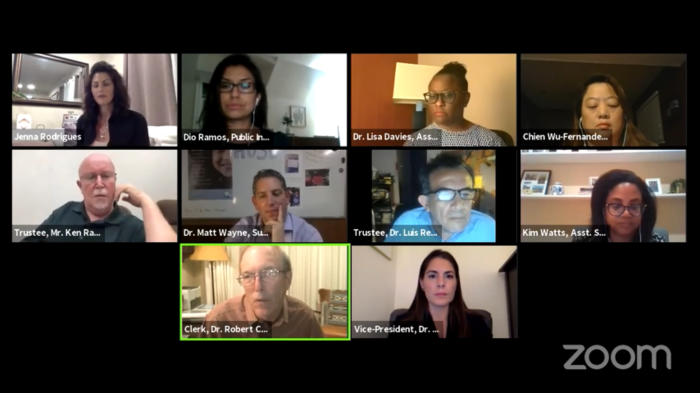 Oquenda apologized for any appearance that she was pushing her policy ahead of work already being done by Walker and the board in regards to race and equity at the school district.

But Reynoso continued with his criticism of Oquenda. “This is what white privilege looks like. The colored people aren’t good enough to fix this, but we will come in and save you,” Reynoso said.

School board members Dr. Ken Rawdon and Dr. Robert Carlson were also caught flat-footed by Walker and Reynoso’s comments. Rawdon apologized and cited his own “white fragility” and privilege on Wednesday night. Carlson, meanwhile, caught the ire of Walker earlier in the meeting when he attempted to quickly move the anti-racist agenda policy item before she could make public comments. “Don’t silence me tonight, Dr. Carlson,” Walker said.

When Carlson again attempted to interrupt Walker, she admonished him. Walker asserted Carlson had obtained further discussion on the agenda item from other board members. Walker later raised the question of whether Carlson had violated the Brown Act. “I’m a little upset because I am a black life that matters, so give me a little time here,” Walker continued.

Oquenda, who is a first-term member of the school board, has spoken at length about acknowledging her own white privilege in recent weeks. On Wednesday night, she prefaced the night’s developments by speaking about systemic racism and urging whites to realize their implicit biases toward black people. “This took centuries to build and it has perpetuated itself over time,” Oquenda said.

“I have to redo or reconsider a lot of my thoughts and thinking. I encourage all of us to answer that call of excavating our hearts and our mind to see where do we have our own nooks and crannies that we need to examine. The ways that we have taken in this pervasive water we swim in that is whiteness and white supremacist culture,” she added.

Despite Oquenda’s intentions, this is not the first time she has faced push back for her efforts on race. Two weeks ago, Oquenda penned a opinion piece on her personal blog that slammed charter schools for being inherently racist. However, her sentiment on the issue failed to hit the mark for some.

A response to Oquenda’s piece was penned by a blog centered on Oakland schools that has been widely disseminated in the Hayward area. In the posting, the author called out Oquenda for grandstanding on the issue of Black Lives Matter.

“I have never seen April from Hayward.  I have never even heard of April from Hayward until she sent an email, playing on Black Lives matter, but exploiting it for a narrow political gain, on some anti-charter nonsense.  This is the worst form of opportunism, so please stop,” the post read. The author later apologized for the tone of the piece after speaking with Oquenda.