HAYWARD SCHOOL BOARD | Two current members of the Hayward School Board are participating in an inappropriate relationship, according to text messages obtained by The Citizen. In addition, numerous sources, including the disgruntled ex-fiance who confronted one of the alleged participants last January, say School board members Jesus Armas and Maribel Heredia have been an item for, at least, one year, without revealing their relationship to fellow board members and school adminstrators.

Whether improper or not, Armas is married with two adult children, the secret relationship could run afoul of state sunshine laws and give critics of the city’s downtrodden school district additional fodder to seek change in its leadership. The district, ranked one of the worst in California, has laid in the shadow of a potential takeover by the state for several years due to overspending and general mismanagement. Armas did not responded to an email sent Tuesday. However, Heredia denied the affair and said no violation of the Brown Act have occured.

“Given the amount of mis-information out there and the personal attacks founded by absurd and vindictive people without values or ideals, I hesitate to comment at all,” wrote Heredia on Wednesday afternoon. “I, fortunately, have many trusted and valued friends. Some of which are valued and trusted members of our educational community, the extent of those friendships are not known to anyone. Anything else is supposition and rumor, designed to remove the focus from our success and work for the educational needs of our students and families.

“I am familiar with the Brown Act and those who understand the law, know there is no possibility of any violation ever occurring on my account. And
those who know me, know there is never an occasion to question trust in my character.”

Rumors of the illicit love affair had been heard around Hayward’s chatty community of politicos and business owners going back to late last year. Two sources, who asked that their names not be used because of their ties to the school district, said the couple’s arrival last June 5 at an election party for the passage of the city’s school parcel tax confirmed for them the two were having an affair. “If you didn’t know anything about them, you would surely guess they were together,” said the contact, who also noticed Armas carrying Heredia’s handbag upon arriving at the event.

Text messages from between June 13 to June 26 from Armas to Heredia also shed light on an love affair progressing more further along than playful flirting among consenting adults and describe numerous meetings during the short period of time. “So, what did you buy?” asked Armas in a text on June 16. “Crotchless panties,” said Heredia.

In another, Heredia describes having a headache and doubts she will attend the school board meeting that evening. “We have a lot on agenda. ¾ principals, budget, SPSA, music, ELD/ALD waivers and more. Will u b able attend? Maybe u can go home and rest beforehand,” texted Armas. “Can’t rest,” replied Heredia. “head feels better when you are holding me.” A minute later Armas offers, “How about after mtng.”

A day earlier on June 19, Heredia seems to reveal the deepening relationship, in her mind, between her and Armas when she complains he abruptly changed plans between them in order to attend an A’s game. “Don’t know why you are telling me at the last minute about the change in plans. I am upset,” Heredia texted. Apparently unaware of the reference, Armas says, “It’s not rushed. Let’s have lunch.”

“Not talking about lunch Jesus,” she replies in two messages. “I thought you were coming over tonight. You changed plans at the last minute or you had planned to go to game, and did not think about letting me know. very thoughtless of you.” 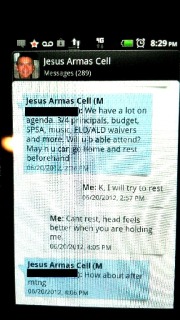 Joe Aldana, Heredia’s ex (the two were together 18 years, but never married and have two children together), says he confronted Armas about the affair in late January after reading other text messages and being aware of numerous phone calls between the two. A school board-sanctioned trip to Sacramento for an education conference attended by both Armas and Heredia fueled Aldana’s suspicions the two were having an affair. Armas never admitted the affair, recalls Aldana, but remained cagey during the questioning and attempted to console Aldana about his personal problems with Heredia and its effects on their children. However, Armas mentioned his wife had begun worrying about gossip in the community over numerous public appearances between himself and Heredia, said Aldana, who is seeking joint custody with Heredia of their two children, 16 and 10-years-old.

Apparently, being a member of elected office in Hayward is becoming a more successful route to romance than joining Match.com. As reported in The Citizen last month, Armas’ successor in the city manager’s office, Greg Jones, also entered into a secret relationship with then-Councilwoman Anna May. The Council and city attorney, in that case, pressed the two to reveal their budding romance, but neither would do so. The situation ultimately led to the council holding closed session meetings without May and, according to sources aware of the council’s thought process; they were setting the path to fire Jones. He eventually resigned in March 2010, but returned this month to the council after winning election last June. In the Jones/May affair there is one major difference: May was technically Jones’s boss. The council hires the city manager. In the case of Armas/Heredia, both are equals on the school board, however, there is reason to worry both discussed agenda items together and with other members of the board. Member-to-member discussion is permitted under the Brown Act, as long as the group does not exceed a majority of the board. Hayward’s school board consists of five members. The Citizen also obtained a transcript of deposition where Heredia described not reading agenda packets beforehand and admits to relying on another board member to explain some business-related items to her. (Details of the transcript will be reported in The Citizen in coming days.) 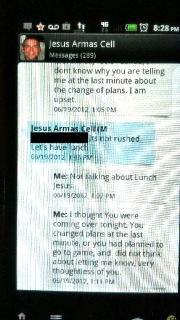 Outside the salaciousness of the situation involving Armas and Heredia, their secret romance presents the school district and city with a list of potential pitfalls surely heightened by the volatility nature of extramarital interpersonal relationships. For instance, earlier this month in Southern California, a male city councilman in San Fernando was forced to resign and admit his extramarital affair in public with another member of the council, coincidentally, also named Maribel. Both council members had recently gained temporary restraining orders against each other stating they must stay at least 100 feet from each other. The forced arrangement obviously made sitting together on the chamber’s dais impossible and .

In Hayward, it is widely accepted that Armas is the city’s most well-known insider and fixer. His expertise on a bevy of governmental issues is highly sought after not only in Hayward, but in surrounding cities. In 2009, Armas even consulted for Sutter Health in gaining approval from the Alameda County Board of Supervisors to pass the hospital provider’s environmental impact review to begin rebuilding Eden Medical Center in Castro Valley. If there is a person who knows how to get things done and, more importantly, how not to, it is Armas, according to numerous contacts in Hayward. After serving as city manager earlier this decade, he was appointed to the school board in 2010 and won re-election later that year. Armas recently pulled papers to again run for re-election this November.

Heredia is far less known. She won election to the school board in 2008 on the heels of opposition to the No Child Left Behind Act and participated in a lawsuit against the U.S. Department of Education that was critical of a section in the law defining unlicensed teachers as highly qualified. It is believed, through sources, she too will run for re-election this fall.