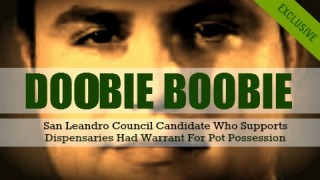 ELECTION ’12//SAN LEANDRO CITY COUNCIL DIST 4 | A San Leandro city council candidate who has previously stated support for bringing medical marijuana dispensaries within the city limits was recently notified of a police warrant for marijuana possession, according to sources familiar with the disclosure.

Chris Crow, a candidate for the District 4 council seat in San Leandro’s somewhat conservative bedroom neighborhood of Washington Manor, according to sources, was cited sometime in the last two years for possession of under an ounce of marijuana. He was issued a ticket, but failed to pay the fine, in most cases, treated the same as a simple moving violation.

Although the exact date of the citation is not known, the process of ticketing violators followed the decriminalization of possessing small amounts of marijuana began in 2010 under Gov. Arnold Schwarzenegger. In such cases, nowadays, a citation is given and once paid; the ticket is expunged from the person’s record.

According to sources, Crow, 28, did not pay the fine and it was upgraded to a police warrant. The existence of the citation for marijuana possession became known a few months ago when the San Leandro Police Department denied Crow a ride-along for the council candidate with officers due to a records check which revealed the outstanding warrant. Crow has reportedly dealt with the issue and the existence of the fine is in the process of being expunged. On Wednesday, Crow simply said the charge is “incorrect.”

In the recent past, Crow has been a strong public supporter for allowing medical marijuana dispensaries to open shop in San Leandro. Over the past two years, the City Council has wavered from prohibition to a willingness to discuss the hot-button issue unpopular with older San Leandro voters.

Crow’s brief foray into city politics has been muddled in controversy for nearly a year. His campaign, based upon opening up San Leandro’s lackluster business climate with more lenient zoning and policies for entertainment options in the city and new streams of tax revenue, faced controversy earlier this year when he began an early challenge for Councilwoman Ursula Reed’s seat in his native District 2.

As Reed’s appointee to the city’s planning commission, she was angered by Crow’s designs for her seat and moved to have him replaced. Some in the city were also unsettled by Crow’s strong connection and advocacy for the owner of the Bal Theatre, Dan Dillman, who is also running for council in District 2 amid a zoning battle with City Hall. However, instead of running against the incumbent, Crow moved his address to the open seat in former Councilwoman Joyce Starosciak’s District 4. Starosciak was termed out this fall and resigned in August to relocate outside of the county.

Known to some as a potential up-and-comer in San Leandro, Crow’s strong opinions and penchant for speaking before thinking has gotten him in trouble in the final few months of the race for council. Last month, his comments on Facebook calling Chinese Olympians, “cheaters” and “the sorest people in the world,” angered a large part of the city’s large Asian American population. The demographic makes up San Leandro’s largest racial group with nearly 30 percent of the population.

Crow has also upset residents in the Heron Bay community for the perception he accepted campaign donations from a wind turbine company in the area who plans to controversially erect a wind turbine in their backyards, on the San Leandro Shoreline. And, his recent alliance with noted anti-worker Mayor Stephen Cassidy has also soured progressives in the city.