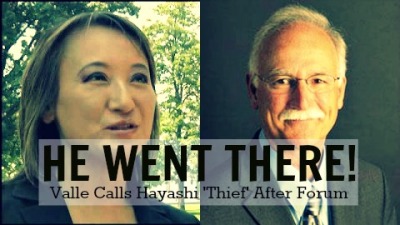 ELECTION ’12//ALCO SUPERVISOR DIST 2 | Assemblywoman Mary Hayashi lobbed the first of many direct attacks at appointed Alameda County Supervisor Richard Valle Wednesday night at the League of Women Voters forum when she criticized the supervisor of accepting a raise as a non-profit CEO for Tri-CEd in 2009 during the Great Recession to which Valle gave no response to until after the forum when he called Hayashi a “thief.”

Hayashi lead into the accusation after Valle reiterated a common criticism of state cuts, including Redevelopment Agencies (RDA). Valle said the closure of RDA’s was one of the worse cuts made by the state in the past two decades. Valle continued to speak of social service cuts by offering an example of a mobile home park in Union City where there was a rental assistance program that provided $150 to seniors who are on fixed incomes, some of which receive nothing but social security, to help pay for their rent.

“That legislation has been slashed,” said Valle. “The state of California, the state assembly and state senate, have been stealing from our cities to balance its budget,” said Valle who named social services including food and clothing, as well as schools as targets. “When is it going to stop? I think it needs to stop now.”

“I’m sure that last comment from Richard Valle was directed at me so I’ll try and address that,” responded Hayashi. She blamed the state of the economy as a result of closing down redevelopment agencies but touted the redirection of funds to “schools and public safety.” “So I don’t know what Richard is talking about when he mentions schools and food services.”

Hayashi then took this as an opportune moment to lambaste Valle with her heaviest attack yet which marked a departure from her usual, somewhat indirect, jabs at Valle often opting to attack the county instead by using the Grand Jury report as her weapon. “I’m sure as a city council member Valle had to cut services when the economy is bad so my question tonight is if he is so concerned about seniors collecting social security then why did he give himself a raise in the middle of the biggest recession in this state? In 2009 he got a $75 thousand raise and his salary became $305 thousand a year as a non-profit CEO.”

After the forum in Union City on Monday Valle said his strategy was to wait for her to attack and then “hit her hard” but Wednesday saw none of that. Valle behaved as usual, quiet and rather catatonic. Not once during the forum was a question raised about crime or ethics that may have alluded to Hayashi’s shoplifting scandal last year and nor did Valle mention it or offer a defense to Hayashi’s accusation. Only after the forum did Valle give a response to The Citizen.

Valle said that he no longer is on payroll with Tri-CED and when he left he was making about the same as he did in 2009 which is $150 thousand a year. “She was probably including my retirement but the number is high,” said Valle before he offered a harsh criticism of Hayashi. “Do you want somebody who has done good work in the community to represent you or do you want a thief to represent you?”

Valle said he did not respond to Hayashi during the forum because he “didn’t want to bring those things up at this forum because it would have been inappropriate.” But Valle did say that there will be criticism of Hayashi’s crime in a series of forthcoming mailers. “It’s the truth and the truth is what sets you free,” said Valle.

Shane Bond is a regular contributor to the East Bay Citizen.