HAYWARD | Jesus Armas, the embattled former Hayward city manager and school board president who chose not to run for re-election in 2012 following an embarrassing sex scandal, has reemerged across the bay. On Wednesday, the South San Francisco City Council is set to approve a 2-year, $230,000 contract for Armas to become its next city manager.

Armas is no stranger to the peninsula. He served as South San Francisco’s city manager from 1988-1993 before being named to the same position in Hayward. He replaces Barry Nagel who announced his retirement early this year. If approved Wednesday, Armas will take over Oct. 14, according to a staff report. He will also receive a generous contract.

In addition to the $230,000 base salary, Armas will receive full benefits plus a $350 monthly automobile allowance and moving expenses including the lowest of three bids plus $15,000, according to the contract. Armas indicates he intends to move from his Hayward home to South San Francisco, according to the staff report. A $75 monthly cell phone allowance is also included in the deal, which may illicit some guffaws in Hayward. 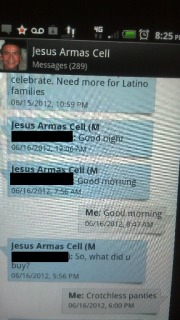 The story of Armas’s downfall on the Hayward school board centered on sexually-charged text messages between him and fellow school board member Maribel Heredia. The infamous screen shots of text messages clearly sent by Armas, who is married, titillated the city and featured queries among other things of “So what do u buy?” Heredia answered: “crotchless panties.”

In the months that followed, numerous Hayward residents repeatedly admonished the couple during school board meetings, while news of the affair spread widely among the East Bay’s chatty political class. Although, they never acknowledged the validity of the articles, its contents were also never denied. Armas and Heredia eventually did not seek likely re-election in November 2012 and are reportedly still a couple, according to recent Facebook posts by Heredia.

UPDATE: On Wednesday night, the South San Francisco City Council unanimously approved Jesus Armas’s contract to become its next city manager. The decision was made without discussion.

Like Loading...
‹ Halliday To Make Mayoral Announcement By End Of September
Richmond’s Foreclosure Plan Yet Another Cry For Help At The Local Level ›