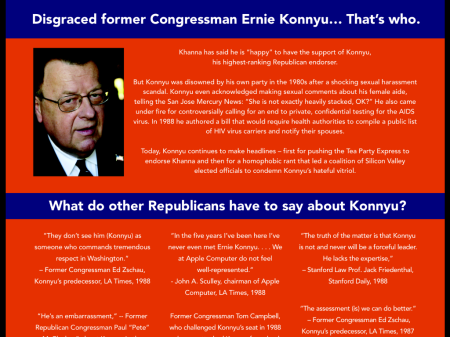 Honda’s campaign characterized Konnyu as “disgraced” and “disowned by his own party” after a series of sexual harassment allegations during his time, two decades ago, in Congress. It is also another attempt by Honda to brand Khanna as conservative.

But, Konnyu did not take kindly to the mailer and took to Twitter Wednesday afternoon to call out Honda.

“@RepMikeHonda You[‘re] going down Tuesday. The trash you sent on me was shameful…& against this retired Member! Go to political hell! Go Ro!”

A few months ago, the out-spoken Konnyu publicly urged members of the Tea Party to back Khanna’s bid to unseat Honda. Khanna, though, has not distanced himself from Konnyu.

One thought on “Former GOP Congressman to Mike Honda: ‘Your Going Down Tuesday’”