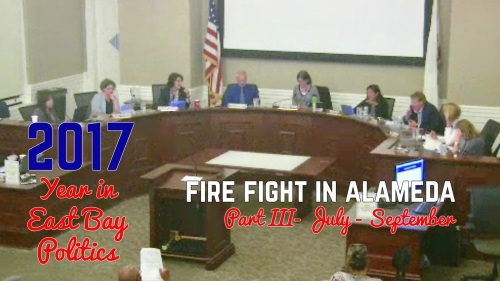 2017 YEAR IN EAST BAY POLITICS
Controversy hit two historically quiet East Bay hamlets during the summer months. First, came Piedmont Mayor Jeff Wieler’s Facebook postings and conversation that denigrated African Americans and the LGBT communities. Piedmonters called Wieler out for comments. He apologized but the rancor was too much for his council colleagues who urged him to resign. Tame stuff, however, as compared to Alameda where the fairly new city manager went to war with the island’s hardest punchers, the Alameda Firefighters’ union. City Manager Jill Keimach’s then turned on some councilmembers by alleging they illegally interfered in her selection of a new fire chief. Names were called, ulterior motives alleged and an independent investigation was launched. Those finding are expected as early as next month, according to sources. But while we’re in Alameda, July also marked the resumption of the two-year battle between renters and landlords and a surprising capitulation.

●The City of Alameda receives 51 affidavits alleging signature-gatherers illegally represented a ballot measure petition to voters. The gatherers were paid by island landlords to overturn recently approved just cause restrictions. The measure would be approved for the ballot, but the City Council, with support from renters’ groups, instead, rescinds the amendment to the ordinance. Renters believe a ballot measure campaign would be too costly to fought back.

>>>>Gov. Jerry Brown’s cap-and-trade extension needed a little help and he got it from an unlikely place in East Bay Republican Assemblymember Catharine Baker.

●Once heralded as the beacon of Mayor Libby Schaaf’s New Oakland, Uber announces that it won’t be coming to Downtown Oakland after all, Well, not fully. Instead of 3,000 new jobs coming to the former Sears building on Broadway, the embattled ride-hailing company is only bringing a few hundred, if that. By December, Uber reportedly sells the building for $180 million.

●Piedmont Mayor Jeff Wieler resigns after some members of the community publicize comments he made on Facebook against blacks and transgender people. Councilmember Bob McBain is appointed mayor. 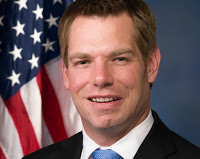 ●Alameda and San Leandro follow through after becoming sanctuary cities earlier in the year by rejecting federal police grants that include a certification the applicants would share information with ICE agents.

●After scuffling on the issue for nearly a year, San Leandro give renters some relief and approve a tenant relocation payment ordinance. But the City Council acquiesces to landlords and lowers the cap on payments to $7,000, down from $10,000.

>>>>TOP 10 STORY  The temperature is rising at Alameda City Hall after the island’s powerful firefighters’ union goes to war with City Manager Jill Keimach over the selection of the next fire chief. Keimach later alleges interference by some councilmembers in her selection process and the police chief fingers one councilmember. An investigation is expected to conclude sometime in early 2018.

●After several versions of the so-called Battle of Berkeley, the City Council votes to amend its use-of-force policy and allow its police officers to use pepper spray.

●Funding for a proposed public bank in Oakland and possibly including the county and several East Bay cities receives funding to begin a feasibility study.