Brendan St. John believes that if Rep. Eric Swalwell follows up on his numerous trips to Iowa and eventually jumps into the 2020 presidential race, he will ultimately leave his Tri-Valley and East Bay constituents without sufficient representation in Congress for the next two years.

“At the end of the day, I think he’s laying the groundwork for a run at higher office and you can’t serve your own political ambition and your district at the same time. He’s spending his time doing those interviews, campaigning, and if he’s truly committed to his district, stick to the issue affecting here and worry less about those types of things,” said St. John, who is running an independent campaign in the 15th Congressional District. 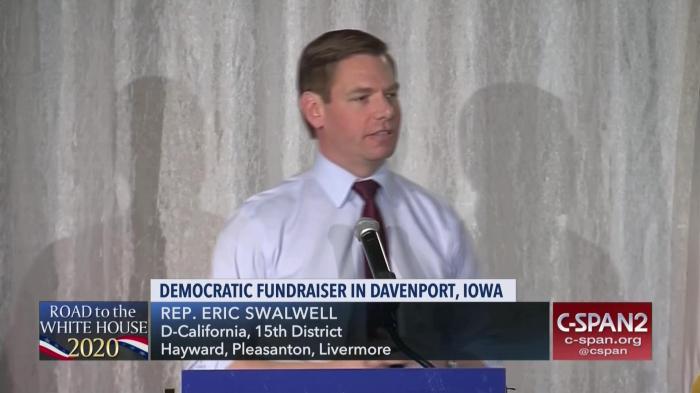 Rep. Eric Swalwell appearing on C-SPAN last April for a fundraiser in Iowa.

“He’s hired a new chief of staff who comes from a national polling company. He’s been to Iowa several times during what people would consider classical campaigning and laying the groundwork for a presidential run,” said St. John. “C-SPAN broadcasted one of his speeches in Iowa and the graphic at the bottom.”

“I think what people in the district care about is, are you committed to representing me for the next two years?, St. John added. “I think people are thinking, if I elect you are going to be focused on serving the district because presidential campaigns kickoff in 2019. If he’s focused on that then he’s not focused on the things in the district that need to get done.”