Home › Election 2018 › For two weeks, Kaplan was running for Oakland mayor, then she wasn’t

For two weeks, Kaplan was running for Oakland mayor, then she wasn’t

Oakland Councilmember Rebecca Kaplan was coy, last week, about providing a time line detailing the thought process that lead to her decision not to run for mayor this fall. Kaplan only said the decision was made recently.

The time line, at minimum, gained a marking spot on the calendar this week, when records filed with the Alameda County Registrar’s Office showed Kaplan set up a committee on May 24 for a mayoral run in 2018.

Although there were clear signs beforehand that Kaplan was eyeing a challenge to Oakland Mayor Libby Schaaf, the filing and the eventually decision she announced against running on June 7, suggests great uncertainty in the mind of the at-large councilmember who previously ran for mayor in 2010 and 2014. 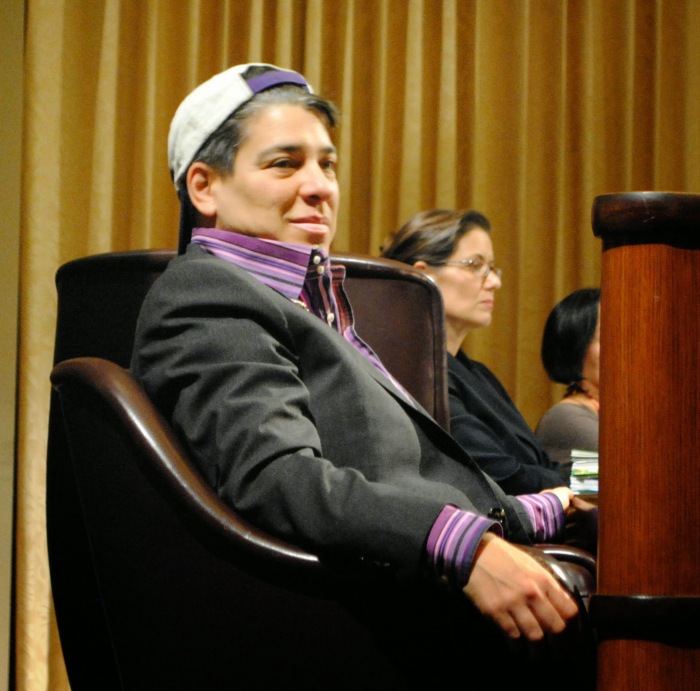 Oakland Councilmember Rebecca Kaplan in 2014 while serving on the Oakland City Council with then-Councilmember Libby Schaaf, in the background.

Kaplan did not immediately respond to questions about the existence of the filing, known as a Form 410 Statement of Organization Recipient Committee. The filing allows candidates to begin fundraising.

What occurred in the two-week window between the filing and the Kaplan’s endorsement of Oakland activist Cat Brooks for mayor is unclear, although there are theories. But most point to comments made by Kaplan’s former political consultant Doug Linney to the San Francisco Chronicle just days before pulling back her aspirations for mayor.

Just days before dropping out of the race before it started, Kaplan was handing out stickers touting a run for mayor with the same purple logo she used during her 2014 mayoral run.

“I just think it’s a bad move for her,” Linney told the Chronicle.

Linney’s comments may have shaken Kaplan’s confidence, some insiders believe. Others believe the Schaaf’s campaign steered the warning to the Chronicle’s Matier & Ross, a strategy that is well-known at Oakland City Hall, not only under Schaaf, but previous administrations.

In addition, Linney is one of the East Bay’s top political consultants, a rank that adds considerable weight to his forecast of the upcoming Oakland mayoral election.

There were also other signs that Kaplan’s decision to back out of a potential race was made at the last-minute. Just days before dropping out of the race before it started, Kaplan was handing out stickers touting a run for mayor with the same purple logo she used during her 2014 mayoral run.

Furthermore, in an interview with Brooks after receiving Kaplan’s endorsement she alluded to the existence of a specific campaign strategy relying on Ranked Choice Voting to team up and cobble together each others first and second-place votes to overcome Schaaf in November, just like Jean Quan and Kaplan used to defeat Don Perata in 2010.

A number of Oakland insiders believe a potential Kaplan challenge, along with Brooks,  represented a worrisome tandem for Schaaf’s re-election campaign. And when Kaplan announced a press conference shortly before noon on June 7, Schaaf’s response, a hastily released push poll that showed Kaplan languishing behind the incumbent mayor, only bolstered those theories. The validity of Schaaf’s polling were later met with significant skepticism, with some positing the speed of Schaaf’s campaign to undercut Kaplan suggests the results for both Kaplan and Brooks may have been much higher.

Nonetheless, some Oakland political observers remain uncertain whether Kaplan will really sit out the mayoral race, despite her stated desire to focus on repealing the statewide Costa-Hawkins Act this fall. To some, her comments on June 7 did not do enough to shut the door on running.