Alameda Mayor Marilyn Ezzy Ashcraft believes the city manager and council scandal that engulfed City Hall over the past two years was, in some part, hastened by former Mayor Trish Herrera Spencer’s lack of leadership as the controversy was unfolding.

Ashcraft made the statement last week prior to the Alameda City Council preparing the its official responses to a civil grand jury’s findings that two Alameda councilmembers violated the charter by allegedly pressuring the then-city manager to hire a candidate for the open fire chief position that was supported by the city’s firefighters’ union.

Reading from prepared remarks, Ashcraft said she hoped the city could move on from the scandal and lauded the current council for its camaraderie and level of accomplishment since they were elected last November.

“People are complex and one person is many things. We’re talking about a particular episode at a particular point in time. I will second what others have said, this council, since we were elected–I became mayor–it has been a pleasure to work with all of my colleagues. We have gotten a lot of things done. But again, as I said before, we cannot look away and pretend the past did not happen. We are being watched for our response and I think we can come through on the other side a better council and to set example for this body and future bodies,” Ashcraft said.

They may have tried to interfere. I do not think they were successful because Jill hired who she wanted to hire.-Former Alameda Mayor Trish Herrera Spencer on why she believes Oddie and Vella did not violate the charter, at least, based on the grand jury’s perspective.

She then veered from her statement and spoke off-the-cuff about Spencer’s handling of the matter while mayor.

“One of the points that the grand jury made in its report was that in some councils, a strong, capable mayor would have put a stop to what was going on, but that was not the case here,” Ashcraft said. “We have a different council now and I believe that we are going to take this matter into hand and do the right thing.”

As Ashcraft was delivering the scathing indictment of Spencer’s time as mayor, there were murmurs among the packed council chamber’s audience, along with eyebrows raised in surprise.

Spencer attended the meeting and spoke on the grand jury item. She was sitting in the second row, near the door when Ashcraft make her comments.

In an interview last Thursday, Spencer slammed Ashcraft for personalizing the scandal for her own benefit and added, it was her role as mayor at the time to stay above the fray at city hall.

“It was challenging to work with her. I think she has a hard time focusing,” Spencer said, adding, “It shows immaturity on her part. Not appropriate. And more importantly, it shows that she does not understand the complexity of this matter for our city. It’s historical. Instead, she decided to make it about her being mayor.” 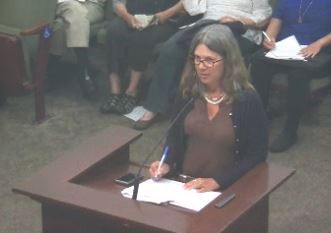 Spencer said the only role as mayor was to “do my best to run the council like a judge and be impartial,” but Ashcraft was not impartial, she continued, because the Alameda firefighters’ union attempted a lobbying effort asking Ashcraft to write a letter of recommendation in support of their preferred candidates for fire chief.

“The fire department reached out to her to get her on board. They did not reach out to me. That is a good example that I was more impartial in the process than she was,” Spencer said. Ashcraft, however, declined to write the letter, according to the city’s independent investigation.

During last Tuesday’s meeting, Spencer laid out her own preferences for how the council should respond to the grand jury’s findings. Spencer said the grand jury was incorrect when it found the Alameda city charter lacked clarity for when a councilmember can be removed from office. Alameda’s elected officials also receive sufficient training on the charter, she added.

The city’s independent investigation was not undermined when Oddie and Vella participated in the editing of the report, Spencer said. “We asked the city attorney at the time and they were told they could participate. But at the end of the day, I think the report was independent,” she said.

But when it came time to offering her opinion on the finding that Oddie and Vella violated the charter, Spencer’s speaking time had elapsed. Ashcraft abruptly ended Spencer’s remarks. A manner reminiscent of Spencer, who as mayor often shut down speakers with whom she disagreed with.

Spencer said last week that she partially disagrees with the grand jury’s assessment of the interference finding. “They may have tried to interfere,” Spencer said of Oddie and Vella. “I do not think they were successful because Jill hired who she wanted to hire,” she added, referencing former Alameda City Manager Jill Keimach, who made the allegations of interference against the two councilmembers.

Furthermore, the grand jury was not answering the most pertinent question because the bar for violating the city charter is whether there was a concerted attempt by the officials to do so. In that case, Spencer is not ready to make a determination.

She believes the public needs to hear the entire audio recording of the meeting with Oddie and Vella that was secretly made by Keimach before it can be assessed whether the councilmembers violated the charter.

In some ways Ashcraft’s comments were a clap back at Spencer, albeit, about eight months later. Spencer’s literal last words before ending her stint as mayor last December included a diatribe against what she believed was Ashcraft’s dishonorable campaign tactics against her. Spencer did not name Ashcraft in the criticism.

There is some irony to their apparent dislike between the two mayors. A number of city hall insiders believe the interaction between the two officials as they served together on the council over the past four years was a catalyst for some of the dysfunction that often spilled over during council meetings and other joint appearances around the island.

It has never been fully explained from where the discord between them emanates, other than having distinctly opposite personalities and public personas. Spencer is the glad-handing, hugging and kissing populist politician, while Ashcraft is the quiet scholar with a hoity-toity sheen. Or, Spencer, the high-five. Ashcraft, the firm handshake.

Like Loading...
‹ No. Scott Haggerty is not running for re-election, he just likes chili
Oakland’s lawsuit against NFL gets a second Hail Mary attempt; Councilman wants to ‘apply’ for a team ›