For months Alameda County Supervisor Scott Haggerty looked and sounded a little less rambunctious than normal. Last May, he surprised many by announcing he would step down next year as District 1 county supervisor. But a flyer promoting his annual chili cook-off re-election fundraiser on July 26 is throwing people for a loop.

Haggerty has not changed his mind about leaving the Board of Supervisors after 23 years. He just loves a party. But the fundraiser has direct implications on the race to replace him starting in March, and on other races, while maintaining some power for himself after he leaves office.

The annual summer chili cook-off and barbecue at the Alameda County Fairgrounds features sponsorships ranging between $500 and $5,000. 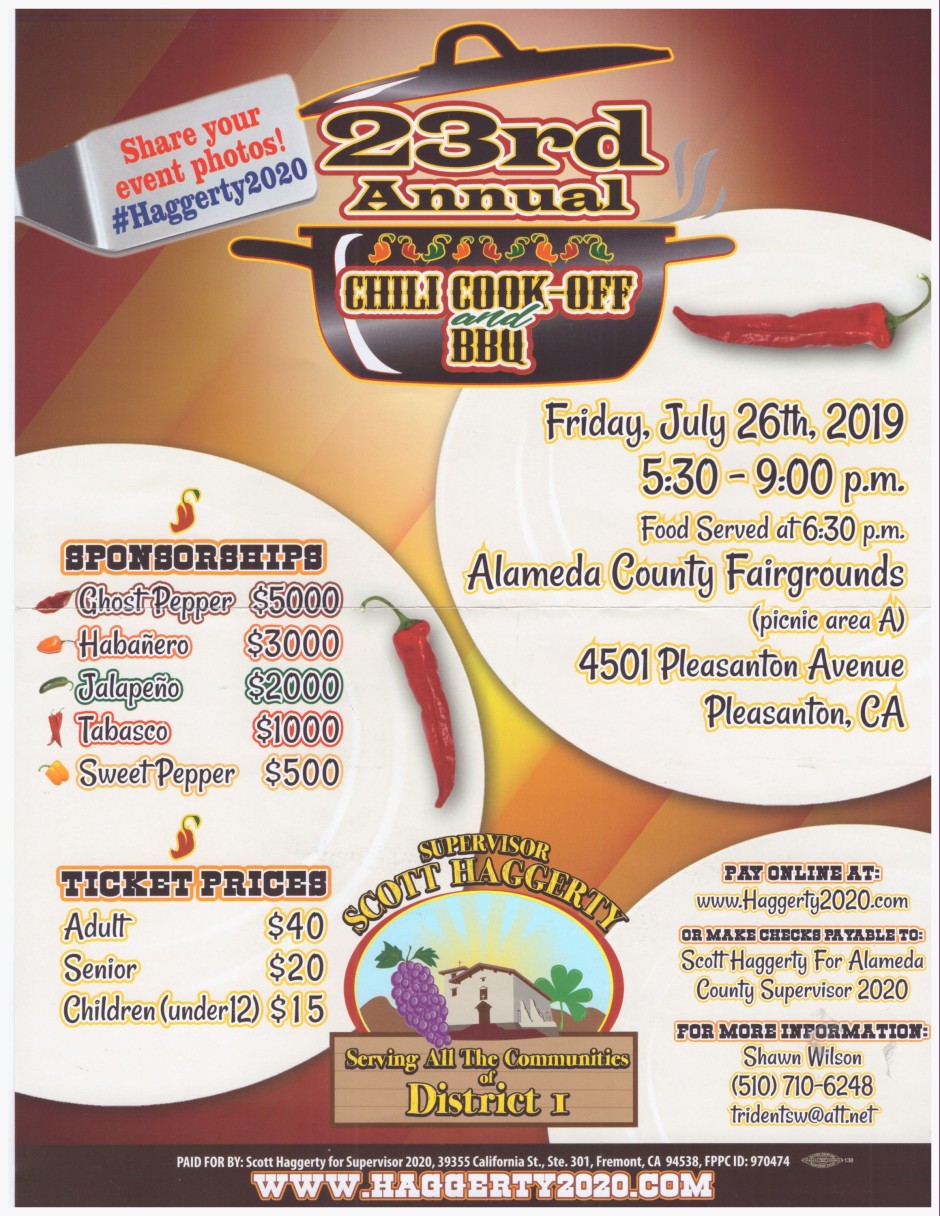 As it stands today, the campaign for District 1 includes state Sen. Bob Wieckowski and Fremont Coucnilmember Vinnie Bacon. A number of other formidable challengers are waiting in the wings, including former Assemblymember Catharine Baker and Haggerty’s own chief of staff, Shawn Wilson.

Ironically, Haggerty’s ability to put a financial finger on the scales is limited by a county ordinance he introduced in 2010 that limits contributions and transfer to a candidate from existing committees to $20,000 per election cycle.

The ordinance was a response to Bill Lockyer transferring nearly $2 million to the account of his wife, Nadia Lockyer, and her 2010 campaign for Alameda County supervisor.

Haggerty’s current cash reserves, coupled with the proceeds from Friday’s fundraiser, also gives Haggerty an opportunity to wave cash around in a number of races in the Tri-Valley and Fremont in the fall of 2020.

Looking through another lens, it also allows prospective candidates to fawn over Haggerty, in effect, paying their own alms for his financial contributions.

Since announcing he would not seek re-election, several insiders have quipped that it appears Haggerty’s public appearances have taken on the contrived sheen of a rockstar’s farewell tour.

Haggerty’s influence on who becomes the next supervisor goes beyond money. His endorsement is valuable, particularly in the March primary, because of the expected large field of candidates. Most believe Wieckowski has the inside track, but if Wilson joins the race, it is conceivable the endorsement is split among them.

However, just how much of a stake Haggerty will seek in local politics after next year is an open question. That’s because he contemplating a move to Tennessee, his office confirmed last week.

‘Road to recovery is uncertain’: DeSaulnier is stable, remains in critical condition