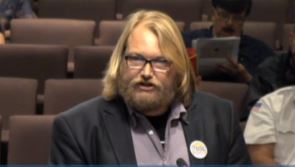 While East Bay tenants activists have changed the political landscape in recent years in Oakland, Alameda, and Hayward, by forcing stronger housing protections, their achievements have largely sidestepped implementation in San Leandro.

“The purpose of this initiative is to promote community and neighborhood stability, healthy housing, and affordability for renters in San Leandro by controlling excessive rent increases, arbitrary evictions, retaliation, harassment, and discrimination based on source of income to the greatest extent allowable under California law,” Jeromey Shafer, a member of the group calling itself Tenants Union San Leandro, said last week during a council meeting.

Shafer invited the city council and public to weigh-in on the proposed draft initiative before it is submitted to the Alameda County Registrar of Voters.

San Leandro elected officials have avoided the menu of new rent protections that have become increasingly prevalent in other East Bay cities. Just-cause protections, which allows landlords the ability to evict tenants for specific reasons is one notable omission from San Leandro’s municipal ordinance. Last spring, Hayward joined the list of local cities with a just-cause ordinance.

In the past, San Leandro elected and city officials have argued the type of debilitating housing displacement and rent-gouging that has sparked renters’ activism in other cities has mostly avoided San Leandro.

Statistics showing San Leandro’s average rent increases sitting near the bottom of all Alameda County cities has often been cited as evidence that the housing crisis is less acute in the city. Furthermore, San Leandro’s Rent Review Board has rarely met over the past two years because of a lack of complaints for it to hear.

In late 2015, the city council approved tenant relocation payments in response to concerns lodged by tenants. But tenants activists contended at the time that the ordinance had been significantly watered-down by some of San Leandro’s most-connected landlords.

But the lack of an organized tenants rights movement over the years in San Leandro may be a reason for the lack of political expediency exhibited by some elected officials when it come to the issue of rising rents.

The early emergence of Tenants Union San Leandro could change that. Building upon its success earlier this year in lobbying city officials to enact stringent, new protections for San Leandro’s large mobile home communities, the renters group hopes to apply some aspects of their previous advocacy to the proposed ballot measure.

A prime example being a portion of the proposed measure that would limit annual rent increases to the lesser of four percent or percentage change in the Consumer Price Index.  The rent cap and just-cause rules was approved this year only for San Leandro mobile home owners.

AB 1482 is a good start, Carol Habercross, a member of Tenants Union San Leandro said, in reference to the assembly bill prescribing new rent protections in California. “I believe we need to start the discussion here locally about renters and try to work for them at the local level,” she added.

The proposed ballot measure also seeks to expand tenant relocation payments, require the city to offer counseling for renters, and allow for more accurate data collection in order to monitor rent increases and evictions. A Rent Stabilization Board would also be created to administer to the new programs.

“We believe housing is a right and that we can and should allow good tenants to stay in their homes and not face unjust evictions or de facto evictions through outrageous rent increases,” said Shafer, who ran for San Leandro mayor last year. While his campaign fell short, the slate he formed with three other city council candidates may have contributed to the upset of incumbent Councilmember Lee Thomas by Victor Aguilar, Jr.

The “Fresh, Clean Slate” repeatedly contended in campaign materials that some members of the city council were beholden to well-connected local landlords and developers.

But the proposed rent measure also includes an olive branch to San Leandro homeowners. According to a draft of the initiative, owners with up to two single-family rental homes would avoid restrictions on rent increases. The same would go for those renting rooms in their home and Accessory Dwelling Units, also known as “granny flats.”