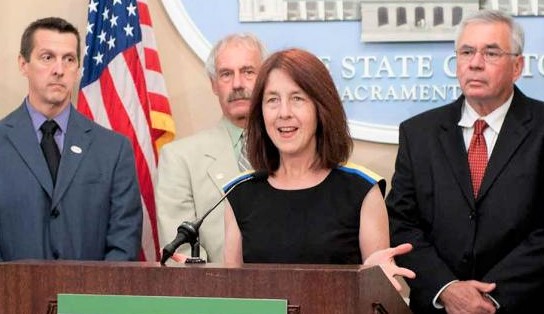 The NCAA reversed course Tuesday after its Board of Governors announced they will begin allowing college student-athletes to be paid when their name, image and likeness is used by universities.

The announcement comes after East Bay state Sen. Nancy Skinner’s bill of similar intent sailed through the California Legislature and was signed into law by Gov. Gavin Newsom on Sept. 27.

The law had been viewed as potent threat for upending the NCAA’s long-standing reliance on free labor amid billion dollar revenues. Critics often equate the arrangement to modern-day slavery.

NCAA leaders, who govern college athletics in the U.S., balked at Skinner’s legislation when it was introduced earlier this year. They later threatened to ban California colleges and universities from participating in NCAA championship events and tournaments if the bill was passed.

The devil will be in the details.-State Sen. Nancy Skinner in a statement that was both celebratory and watchful of the NCAA’s follow through on the issue.

Participation in the NCAA men’s and women’s basketball tournaments and college football bowl games are lucrative endeavors for universities. The proceeds of which, in many cases, fund an entire roster of low-revenue sports.

But the writing for the NCAA appeared on the wall in recent weeks. Skinner’s bill had bred copycat legislation in other states, particularly New York, where lawmakers are proposing skimming up to 15 percent of profits from sports competitions to pay student-athletes.

“We must embrace change to provide the best possible experience for college athletes, said Michel Drake, the chair of the NCAA Board of Governors. “Additional flexibility in this area can and must continue to support college sports as a part of higher education. This modernization for the future is a natural extension of the numerous steps NCAA members have taken in recent years to improve support for student-athletes, including full cost of attendance and guaranteed scholarships.”

Skinner was celebratory, in a statement, but also cautious. “California’s leadership is a game-changer once again! I’m pleased that the NCAA’s announcement shows promise on student athletes getting name, image, and likeness rights, however the devil will be in the details,” she said.

“Here in California, we are clear that we won’t accept arbitrary limitations and look forward to the NCAA’s final action being consistent with the rights all other students have to generate income from their talent and skills.”

Senate Bill 206, the “Fair Pay to Play Act,” was co-authored by Southern California state Sen. Steven Bradford. At face value, the legislation appeared controversial, but ultimately passed through both houses without any opposition.