The San Francisco 49ers are heading to the Super Bowl. State Sen. Bob Wieckowski just hopes to make it to the November general election in Alameda County’s District 1 Board of Supervisors race.

Jed York, the 49ers owner, wants to help the state senator whose current district includes Levi’s Stadium in Santa Clara, the home of the NFC champions.

Wieckowski’s supervisorial campaign reported a $2,000 contribution from the 49ers on Jan. 14, through Jed York & Affiliated Entities, according to a campaign finance report filed with the Alameda County Registrar of Voters. 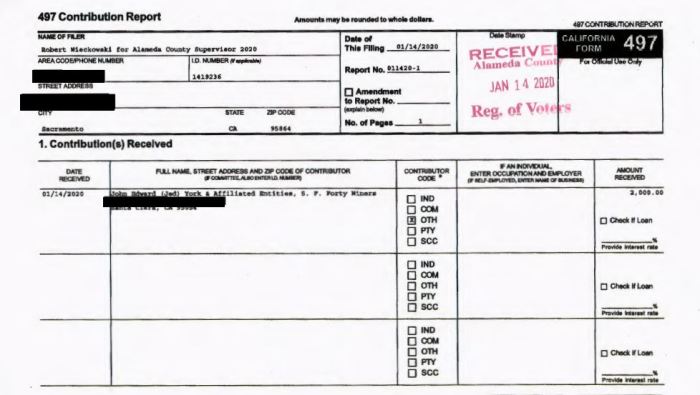 Campaign finance reports are due this month. However, the York donation, because it is greater than $1,000, must be reported by the campaign within 48 hours of receipt.

While Wieckowski’s rival for the District 1 seat, Dublin Vice Mayor Melissa Hernandez, has been racking up a number of large contributions, according to early finance reports, Wieckowski has not. It’s a signal to some that Hernandez’s full campaign report may be more robust than the well-known and more experienced Wieckowski.

Like Loading...
‹ ALCOD1: Fremont mayors, past and present, are taking sides
Márquez, Zermeño back charter school candidate for county Board of Education ›