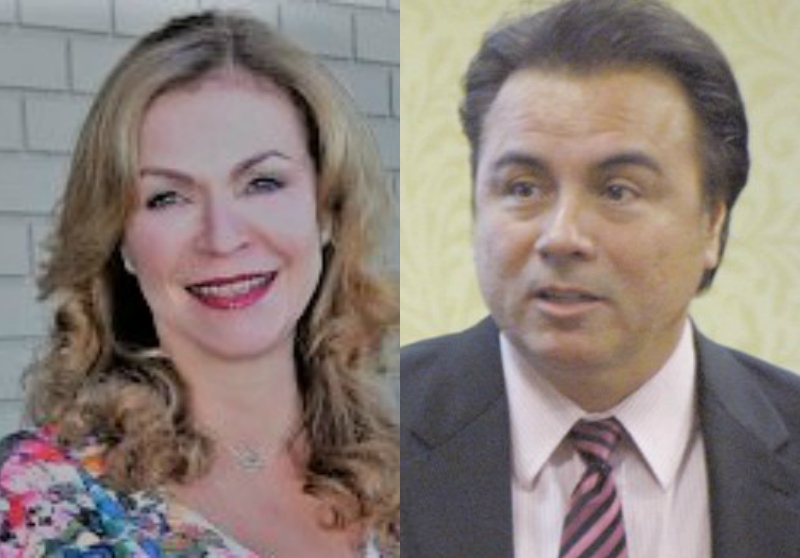 The business associate with several connections to Rose Padilla Johnson, the Davis Street Family Resource Center Executive Director who accused San Leandro City Manager Chris Zapata last year of sexual harassment, told an investigator that he assumed the pair were lovers. The report also discloses that Padilla Johnson may have initiated a campaign to dig up dirt on Zapata’s past.

“[Galvan] suspected all along that Ms. Padilla Johnson was having a relationship with Mr. Zapata, but it was none of [my] business. According to Ms. Padilla Johnson seemed okay with meeting with Mr. Zapata in her car,” according to the report, which, although redacted Galvan’s name, nonetheless includes a description of the speaker as a San Leandro councilmember who served from 1994-2001, and former city contractor. Both descriptions that fit Galvan.

Galvan later told the investigator that in October 2017 Padilla Johnson sought his guidance on a matter involving Zapata. “[Galvan]assumed Ms. Padilla Johnson was going to tell [him] that she and Mr. Zapata were seeing each other, so [he] told her that [he] did not need to know what was going on in her personal life.”

He later remarked that following the sudden death of Padilla Johnson’s husband, former Alameda County Fire Chief Bill McCammon in 2014, “It sounded to [Galvan] that Mr. Zapata ‘wanted’ Ms. Padilla Johnson and he was trying to make it happen over a long period of time. [Galvan] did not think there was anything wrong with that, until Mr. Zapata got nasty when Ms. Padilla Johnson turned him down by telling lies about her and hurting her character.”

The total investigation, however, found holes in Padilla Johnson’s claims, including that Zapata never called her a liar, along with innuendo wrongly attributed to Zapata. In addition, CDs reportedly including expletives and suggestive language were never given by Zapata to Padilla Johnson, as she claimed last December.

But Padilla Johnson and Zapata repeatedly conducting business meetings in the parking lot of the Foster’s Freeze ice cream shop in San Leandro has raised questions about the actual depth of their relationship.

A series of text messages given by Zapata to the investigator suggested that over the years Padilla Johnson and Zapata had formed, at minimum, a comfortable and platonic relationship. In one text, Padilla Johnson remarked that Zapata was a “calming influence” on her.

Padilla Johnson, however, may have harbored some scorn for Zapata, for whatever specific reasons. According to the report, the investigator noted testimony that suggested Padilla Johnson had authorized “opposition research” in order to dig up dirt on Zapata’s past employment as city manager in National City, Calif.

In one heavily redacted section, a conversation at the Alameda County Fairgrounds asserts that Padilla Johnson “‘already has the story on Chris” because [she] hired a private investigator, who ‘found out a lot of stuff.'” The report includes a Public Records Act request made by a former journalist asking for access to Zapata’s personnel record in National City.

The heavily redacted, at some points indecipherable 50-page report, does not add much illumination to the 10-page executive summary released on June 4, which essentially cleared Zapata of the claims. The council then reinstated Zapata as city manager. A separation agreement between Zapata and the City Council, paying him $350,000 in severance costs was announced July 2. Zapata’s last day as city manager is this Tuesday.

The report, though, highlights numerous instances when Padilla Johnson communicated to the investigator a curious ignorance of how city government actually operates. For instance, she told the investigator that she believed Zapata had the power to extend Davis Street’s loan without council approval, a shocking claim for a non-profit leader who over the past three decades has partnered with the city almost constantly and received millions in city grants to help struggling women and children. Padilla Johnson believed Zapata had “more power than he did,” an unnamed councilmember remarked to the investigator.

Some San Leandro councilmembers also urged Padilla Johnson to clearly separate the $1.5 million loan extension with a concurrent application for a medical cannabis dispensary. Both issues contained the potential for becoming politically explosive–an unpaid, taxpayer-funded, $1.5 million loan and the placing a dispensary so close to children using services at the resource center. Perhaps, out of Davis Street’s financial difficulties, Padilla Johnson instead moved forward on both fronts.