It’s been a long campaign in all four Oakland electoral races. Unfortunately, all signs point to Election Night crossing over into Post-Election Morning. It’s not only because of the city’s use of Ranked Choice Voting which can deliver winners at a torpid pace, but the three council races appear to be toss-ups, and the mayor’s race has the potential to drag on. Here’s the skinny on each race:

OAKLAND DISTRICT 2
A year ago at this time it would have been unfathomable to suggest Oakland District 2 Councilmember Abel Guillén would be in the very real position of losing re-election. But here we are. A vociferous union-led opposition, angered by what they believe was Guillén’s recalcitrance during the city’s labor negotiations, along with a very good candidate in Nikki Fortunato Bas, has this two-person race viewed as a toss-up with only days until Election Day. Guillén has experience when it comes to highly contested elections, although the result was not favorable to his cause. Guillén narrowly lost the 2012 18th Assembly District race to Rob Bonta by a few thousand votes. This race, according to experts will be a nail biter in the extreme on Nov. 6 possibly decided by a few hundred votes. PICK: Guillén.

OAKLAND DISTRICT 4
All the factors typically needed for an unpredictably close race exists in Oakland District 4. Three equally credible front-runners–all women, all persons of color–along with a fourth strong candidate who abruptly left the race last month, make this race extremely difficult to figure out. Pamela Harris, Nayeli Maxson, and Sheng Thao are the class of this seven-person race. The oddest part of this campaign has been the inability of its most successful fundraisers to actually stay in the race. Chris Young raised over $100,000, but dropped out before the filing deadline ended in August. Charlie Michelson raised nearly equal sums and made the November ballot, but dropped out citing a personal matter. Michelson is still on the ballot and it’s unclear whether voters are aware of this important fact. He’s likely to still pull in votes next Tuesday. Michelson’s threat to the three top women appeared clear just a day before he dropped out when they all appeared in a video touting their slate while lauding each others positive attributes. That strategy was a massive fail, massively quick. By Oakland standards, District 4 in the Oakland Hills is home to moderate voters. So Thao’s announcement Saturday of a late endorsement from DA Nancy O’Malley might be a sign she believes it will be the slight difference that delivers a likely razor-thin, winning ranked choice result. The only certainty in this race is that it appears destined to be the most unpredictable in the entire East Bay on Nov. 6. So much in fact that based on the strange storylines since the beginning of the campaign, the unlikely scenario that the candidate who dropped out a month ago wins the whole thing almost seems likely. PICK: Thao.

OAKLAND DISTRICT 6
Will the 16-year-reign of the intractable Oakland Councilmember Desley Brooks come to an end Tuesday night? Many in Oakland will tell you yes, based solely on the number of challengers and ranked choice voting. But Brooks has cheated political death many times before and she may well do it again. Like District 4, this East Oakland district will come down to ranked choice voting. But in this case it’s about whether the group of challengers competently instructed their voters to leave Brooks off their top three choices. It’s a hard thing to do, especially when the slate of three–Natasha Middleton, Marlo Rodriguez and Mya Whitaker–left out the candidate–Loren Taylor–who has the most money to burn and has been relatively the most high-profile presence in the local media and social media. Furthermore, Taylor’s strategy to passive-aggressively attack Brooks’ many transgressions by using media reports, instead of his words, could backfire. Taylor’s demeanor is completely different from Brooks’, but demeanor is the single positive that District 6 voters find endearing about Brooks. They think she’s tough and stands up for the district. Do they get that vibe from Taylor? Probably not. It’s not hard to envision Taylor getting chewed up early by Oakland City Hall and the passionate Tuesday night council-goers. Same for the others. But if there is one unifying factor that signals a long-time incumbent is about to be taken out, it’s because the local media churns out numerous negative stories against them. This has happened in recent weeks against Brooks. Headlines suggesting Brooks was accused of alleged graft might do the trick, in tandem, with the Elaine Brown incident. PICK: Desley Brooks. 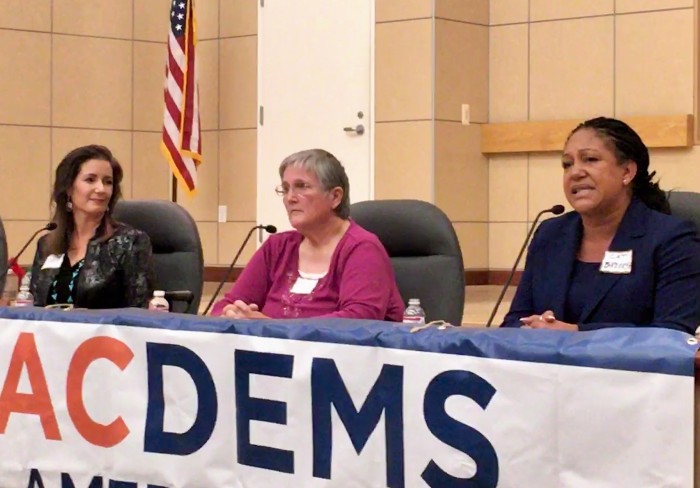 OAKLAND MAYOR
Mayor Libby Schaaf’s legion of opponents are hoping for her ouster next Tuesday. For it to happen, they will need to engineer the biggest upset in the history of Oakland politics. Jean Quan and Rebecca Kaplan used ranked choice voting to knock out Don Perata in the 2010 mayor’s race. Perata won the most first place votes, but lost after failing to understand the voting system used for the first time that year. Like Perata eight years ago, Schaaf is running a pretty standard campaign that uses the power of the incumbency and high name-recognition. Her campaign is showing no hints that her re-election is in doubt. Cat Brooks and Pamela Harris are good candidates who have passionate followings. Schaaf might win this going away just like surprising trouncing her campaign registered in 2014. There’s 10 candidates in the race. For sure, cancel seven of them from any analysis. They will amount to a high single-digit percent of the vote. Overall, Schaaf is popular in Oakland and people know her. Because of this low-information voters will likely include her as one of their top three choices even if her policies and the perceptions about her clash with choices of Brooks, Price, or anyone else on the ballot. PICK: Schaaf.