Within two weeks of Eric Swalwell announcing he was dropping out of the presidential primary race and seeking re-election to his congressional seat, polling was being conducted in the Tri-Valley that floated a number of challengers for his 15th District seat. Who conducted the poll is unknown, but one of the questions is intended to gauge voter appeal for supporting Swalwell if he sought re-election.

A partial list of poll questions obtained by the East Bay Citizen asks respondents to rate the favorability of several potential candidates, including Swalwell. Others seek the level of support for a number of specific candidates.

Only one candidate prompted in the survey is known to be currently interested in running for Swalwell’s seat–Hayward Councilmember Aisha Wahab–who announced her candidacy on April 12.

State Sen. Bob Wieckowski is included in the survey, but he dropped out of the congressional on June 7 to focus on the open Alameda County Board of Supervisors seat.

In addition, the poll asks respondent’s opinion for two names not readily known to be interested in running in the 15th District–Pleasanton Mayor Jerry Thorne and Michael McNerney, the son of neighboring 9th District Rep. Jerry McNerney.

McNerney is a cybersecurity expert who once worked for the U.S. Department of Defense and served in the Air Force. There were rumors in the past that Jerry McNerney may have been interested in running for the 15th District seat, but only if Swalwell did not seek re-election.

It is believed the poll was conducted in late June. Swalwell exited the race for president on July 8. The same day he announced his re-election campaign for a fourth term in Congress. 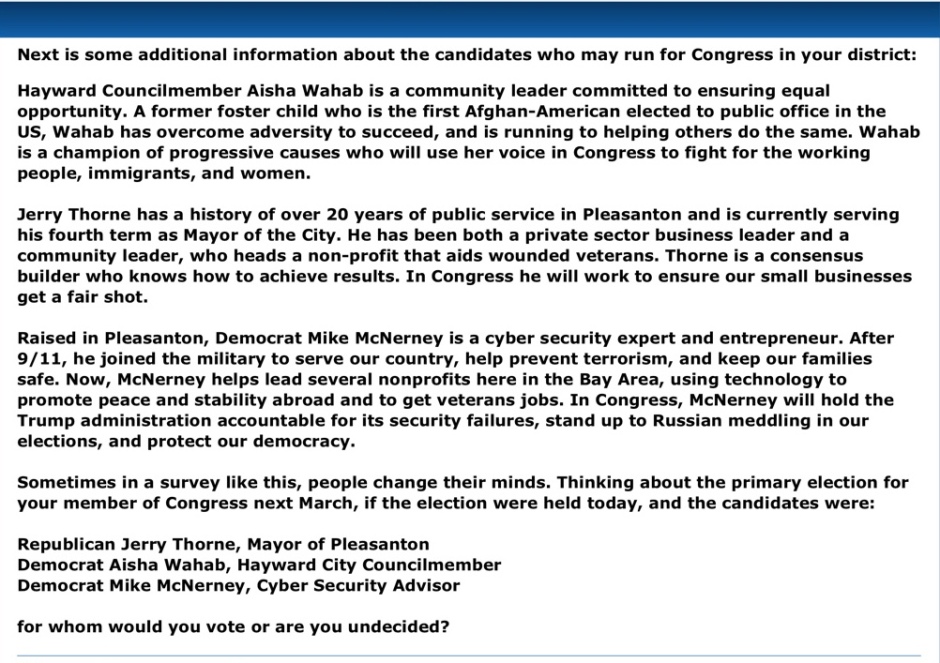 According to a number of political consultants, all of whom have no ties to the 15th District, the likely time frame between the survey being conducted, results tabulated, and Swalwell’s abrupt departure from the presidential race, suggest the campaign may have gleaned potentially problematic information from the data.

Perhaps the polling suggested the existence of simmering discontent in the district over his run for president, along with the nearly two-year shadow campaign that preceded it, according to the general sentiment. Worse, one of the potential candidates, likely Wahab, fared better than expected.

A source last week said Swalwell’s campaign told at least potential challenger for the congressional seat last March that he would exit the race by September and if they mounted their own campaign, they would do so “at their own risk” of Swalwell running for re-election.

During Swalwell’s press conference to announce his withdrawal from the presidential race last Monday, he told reporters that he had not taken voters for granted by running for president. He also appeared to bristle when reporters mentioned the name of Aisha Wahab, the Hayward councilmember who attracted national attention for her early campaign in the 15th District. Wahab entered the race on April 12 under the assumption Swalwell would not seek re-election to his congressional seat. Now that Swalwell has re-entered the primary race, Wahab has not made a decision about her future.

Wahab, though, spoke at an event held by the Tri-Valley Democratic Club last Saturday that included remarks by Swalwell and Wieckowski, among others.

Further stoking speculation about Wahab’s next move is the fact none of Wahab’s early endorsers have withdrawn their support, especially 15th District Assemblymember Buffy Wicks.

Hayward is making it easier for parents to attend council meetings