Over the years, Nadia Lockyer has written similar postings on Facebook that have alarmed friends and acquaintances. Although the comments associated with the posting have not been verified, several on the site report Nadia Lockyer is currently safe with a sibling.

But Wednesday’s posting is far more disturbing than the others, although she has made references to suicide on a number of occasions on Facebook. She has also previously voiced displeasure with Bill Lockyer’s apparent preoccupation with maintaining a positive public image, but never any suggestions before of rape. 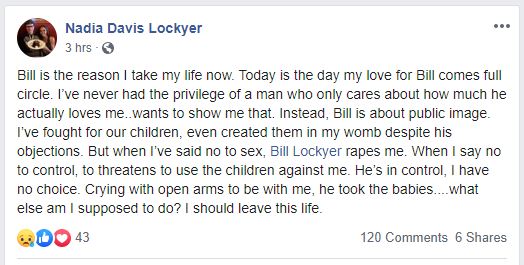 “Today is the day my love for Bill comes full circle. I’ve never had the privilege of a man who only cares about how much he actually loves me..wants to show me that. Instead, Bill is about public image. I’ve fought for our children, even created them in my womb despite his objections,” Nadia Lockyer wrote.

“But when I’ve said no to sex, Bill Lockyer rapes me. When I say no to control, [he] threatens to use the children against me. He’s in control, I have no choice. Crying with open arms to be with me, he took the babies….what else am I supposed to do? I should leave this life.”

Nadia Lockyer has also lodged serious accusations against Bill Lockyer in the past. In 2012, while Bill Lockyer was serving as state attorney general, ostensibly the state’s top law enforcement official, she accused him in the past of providing her with narcotics.

Nadia Lockyer’s bright political future came crashing down in 2012 after she admitted to drug and alcohol addiction. She resigned from the Alameda County Board of Supervisors and has mostly retreated from public life. That is, except for periodic calls for help on social media.

In March 2017, she posted a cryptic Facebook posting that some took as suicidal. Three months later, Nadia Lockyer wrote she was leaving her husband and was living in a women’s shelter.

She later accused him of battery, writing on Facebook, “He hits, hurts me, yells, and I care for my children in between…then he calls people in control to manipulate the situation. I don’t have many options when your hubby is the former ‘top cop’ and is addicted to Ambien.”

The alleged abuse also went both ways. Nadia Lockyer was arrested in July 2017 for abusing Bill Lockyer. He sustained minor injuries from the incident.

The rise and fall of The Lockyers is one of the most tumultuous stories in Alameda County political history. Bill Lockyer is viewed as one of the most consequential elected officials in Bay Area history.  He rose from the San Leandro school board to leader of the state Senate. He then served as attorney general and controller, and briefly considered a run for governor in the early 2000s.

In 2010, Bill Lockyer bankrolled Nadia Lockyer’s campaign for Alameda County supervisor with more than $2 million of funds from his own political campaign. Nadia Lockyer appeared to be a rising star in East Bay politics, backed not only by powerful interests, but also a unique ability to relate to women and minorities.

But in hindsight, what was to come was evident during her 2010 run. Nadia Lockyer often appeared confused and despondent. At some point in the General Election campaign, Lockyer disappeared for a month. It was later learned she had spent the time in rehab for abusing methamphetamine and alcohol. The disclosure became known after she alleged a man, with whom she was having an affair, had hit her while staying at a hotel in Newark. She met the man while in rehab. He was never charged… and there was a sex tape.